Water flows from Lake Ontario into the St. Lawrence River and passes through the hydropower project near Cornwall, Ontario and Massena, New York. The International Joint Commission (IJC) approved this project in 1952.  With the concurrence of the United States and Canadian Governments, the 1956 IJC Supplementary Order of Approval for the project included requirements to reduce the range of Lake Ontario water levels, to provide dependable flow for hydropower, adequate navigation depths and protection for shoreline and other interests downstream in the Province of Quebec.

On December 8, 2016 the IJC, after extensive study and public consultation and with the concurrence of the Governments of Canada and the United States, issued a new Supplementary Order of Approval for the project and adopted a new Lake Ontario – St. Lawrence River flow regulation plan. The updated order and plan, referred to as “Plan 2014”, replace the 1952 and 1956 orders and Plan 1958D. Plan 2014 continues to protect shoreline property and provides net economic benefits, but also includes measures to improve ecosystem health and diversity on Lake Ontario and the upper St. Lawrence River. The plan retains, essentially unchanged, the environmental conditions and coastal protections on the lower St. Lawrence River, below the Moses-Saunders Dam.  Allowing for more natural variations of water levels, the plan aims to foster the conditions needed to restore Lake Ontario and upper St. Lawrence River coastal wetlands and improve habitat for fish and wildlife. The plan will also frequently extend the Lake Ontario recreational boating season in the fall, better maintain system-wide levels for navigation and allow for a modest increase in hydropower production compared to the previous plan.

The International Lake Ontario – St. Lawrence River Board specifies the outflows from Lake Ontario, according to Plan 2014 as required in the 2016 Supplementary Order from the International Joint Commission. This plan was agreed to by the United States and Canada in December 2016 in an effort to improve environmental performance while maintaining most of the benefits provided to other interests by the previous Plan 1958-D, which was in use since 1963. In determining outflows, the Board, in conjunction with its staff, pays close attention to water levels in the Lake Ontario-St. Lawrence River system and on the Great Lakes upstream, and to the effects on stakeholders within the basin .

Water levels vary from year-to-year and throughout the year depending on weather and water supply conditions.  Such variations benefit coastal wetlands and are critical to a healthy lake environment, but may at times and depending on individual circumstances increase the vulnerability of shoreline structures and reduce opportunities for recreational boating activities.  The Board urges everyone to be prepared to live within the full range of levels that have occurred in the past and of those that may occur in the future.  Based on historical observations and projected future conditions, at a minimum, Lake Ontario water levels are expected to range from a high of 75.73 m (248.5 ft.) to a low of 73.56 m (241.3 ft.).  However, it is also recognized that future climate conditions are uncertain, and more extreme water levels may be reached and these extremes may occur more often.  Levels on the St. Lawrence River tend to vary more widely than on Lake Ontario.  Also, these levels do not include the varying local effects of strong winds and wave action that significantly increase or decrease local water levels on both the lake and river, with temporary changes of over half a meter (two feet) possible in some locations.

Lake Ontario outflows have been regulated since 1960, primarily through the Moses-Saunders power dam near Cornwall and Massena, about 160 kilometers (100 miles) from the lake. This facility, shown on the detailed inset, is jointly owned and operated by Ontario Power Generation and the New York Power Authority. The nearby Long Sault Dam in NY acts as a spillway when outflows are larger than the capacity of the power dam. A third structure at Iroquois, Ontario, shown on the main map below is principally used to help form a stable ice cover and regulate water levels at the power dam. 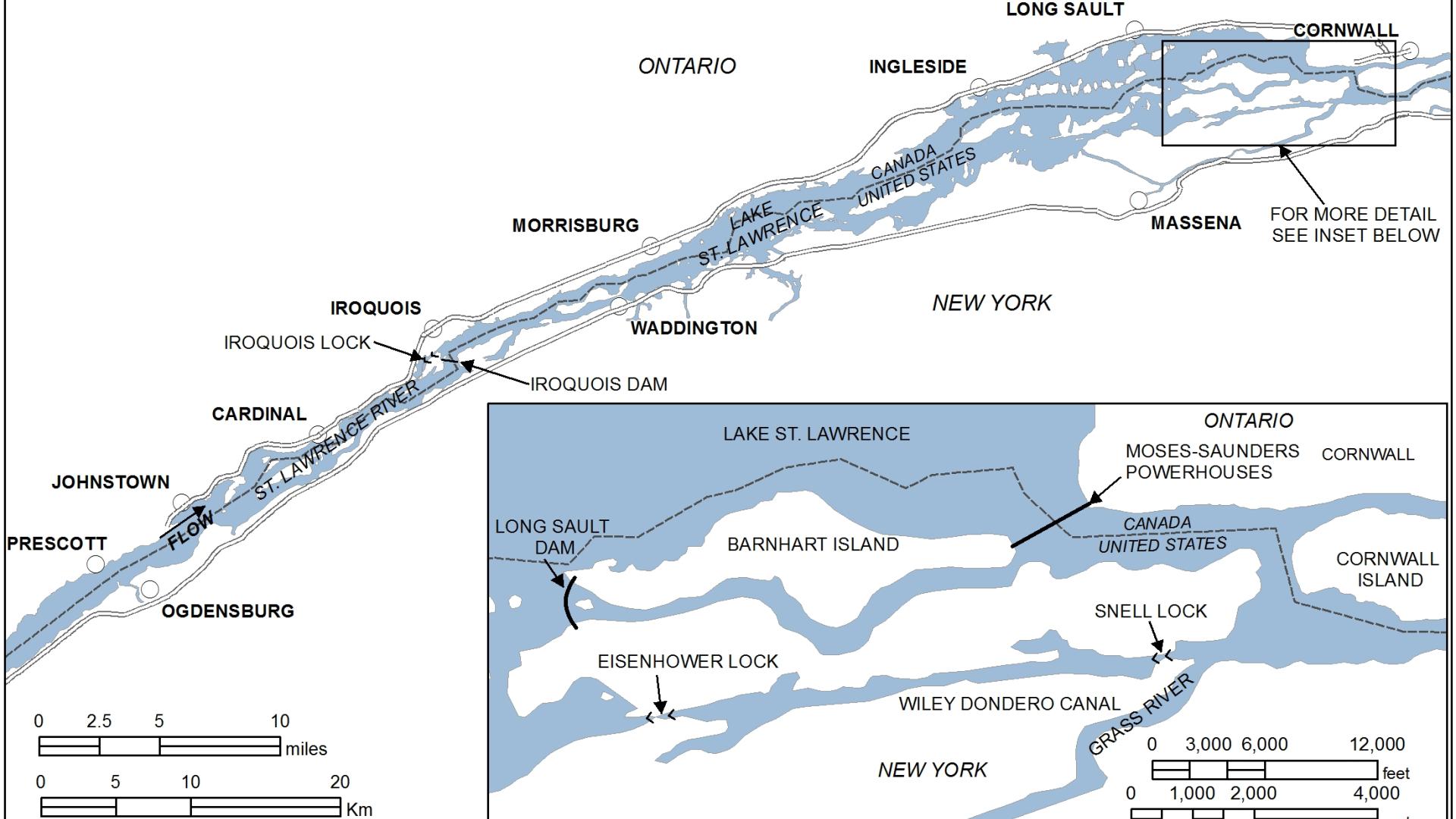 The other projects in the St. Lawrence River are not supervised by the IJC. These include three navigation locks in the international section of the St. Lawrence River, two at Massena and one at Iroquois, Ontario, as well as hydropower and navigation facilities downstream in the Province of Quebec. The IJC’s Orders do not govern the seaway locks and their operation does not affect water levels and flows on a daily basis. The IJC also does not manage the downstream power plants because they are not on the international border and operation does not affect water levels and flows in boundary waters.

The uncontrolled, naturally occurring, water supplies into Lake Ontario are the major factor in determining lake water levels and outflows. The water supplies consist of the inflows from Lake Erie, precipitation minus evaporation over the lake, and runoff from the basin. Plan 2014, the current plan, specifies weekly outflows based on the water level of Lake Ontario, the water supplies to the lake, and conditions upstream and downstream on the river. Generally, higher levels and greater water supplies result in higher outflows, and vice versa. The plan has a number of flow limitations to protect various interests in the St. Lawrence River that may be affected by extreme flows or levels. These limits maintain adequate flows for hydropower production, minimum depths for municipal water intakes and navigation, and protection against flooding.

Regulation of Lake Ontario outflows does not ensure full control of Lake Ontario levels or river levels downstream. The major natural factors affecting levels (inflow from Lake Erie, precipitation, evaporation, runoff, and wind effects on water levels) cannot be controlled. Their prediction is very complex and may not be accurate.  Nonetheless, regulation of outflows has and will continue to help to make water levels less extreme.

As ice begins to form on the St. Lawrence River in the winter, outflows are usually reduced to help form a stable ice cover. After a stable ice cover forms, flows can be increased. Experience has shown that during excessive spring runoff from the Ottawa River, which is a major tributary, flooding in the Montreal area can be reduced by temporary reductions in Lake Ontario outflow. Plan 2014 formally incorporates these temporary reductions in outflow