The International Lake Superior Board of Control hosted its annual public meeting and teleconference on the afternoon of Aug. 21.  A new webinar/teleconference format was employed. A record number of people – 77 - were in attendance. Participants included members of the public, media, government officials, IJC Commissioner Dereth Glance, Board members, staff, and associates.

The Board's U.S. Alternate Member, Col. Bob Peterson, presented information describing the IJC, the Board, the control structures at Sault Ste. Marie, the current Regulation Plan (1977-A), and the current and expected water levels of the upper Great Lakes.

Commissioner Glance spoke regarding the approval and implementation of proposed Regulation Plan 2012. The meeting was opened for public comment, questions, and concerns, with Col. Peterson chairing. The slide presentation shown during the webinar also was made available online to callers beforehand on the Board's new website, and callers were able to interact with the chairman and other participants during the event. 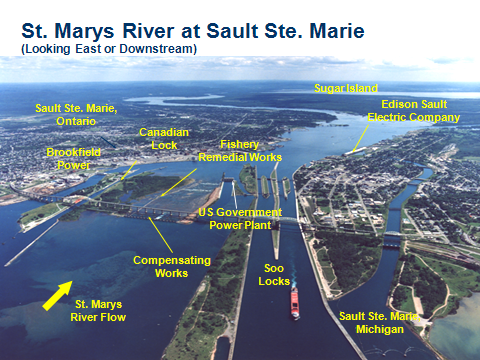 A slide from the Aug. 21 presentation to the public.

One attendee wished to know how this balance has been impacted by Criterion (c) limitations in recent times.  Criterion (c), part of the current regulation plan, limits Lake Superior's outflow to no more than natural or "pre-project" values when its level is less than 183.4 meters.

Therefore, it impacts the balancing mechanism within the plan by limiting the water released to Lake Michigan-Huron.

The IJC has since recommended that the governments of Canada and the United States investigate flexible structural options to restore water levels in Lake Michigan-Huron.

We'd love to hear your thoughts on this. The date of the next meeting with the public will be set by the Board at its spring 2014 business meeting in March. You can contact board secretaries Robert Caldwell or John Kangas with your comments.

The Board also continues to issue, at the beginning of each month, news releases informing the public about Lake Superior regulation and upper Great Lakes water level conditions.  The Board also provides monthly media releases and hydrologic update information to the Commission and maintains a Board website.  A new site format was launched in August.

Comments on the new site also are appreciated. Content includes information on Board members and responsibilities as well as news releases, semi-annual reports, meeting minutes, Plan comparisons, regulation updates, and hydrologic data summaries.  The Board may soon launch a Facebook page to help facilitate communication with you through social networking. The IJC Facebook page can be found here.

Water Levels and Flows
Lake Superior Board of Control