The Coastal Wetlands of Western Lake Erie: Have We Lost our Swiss Army Knife? 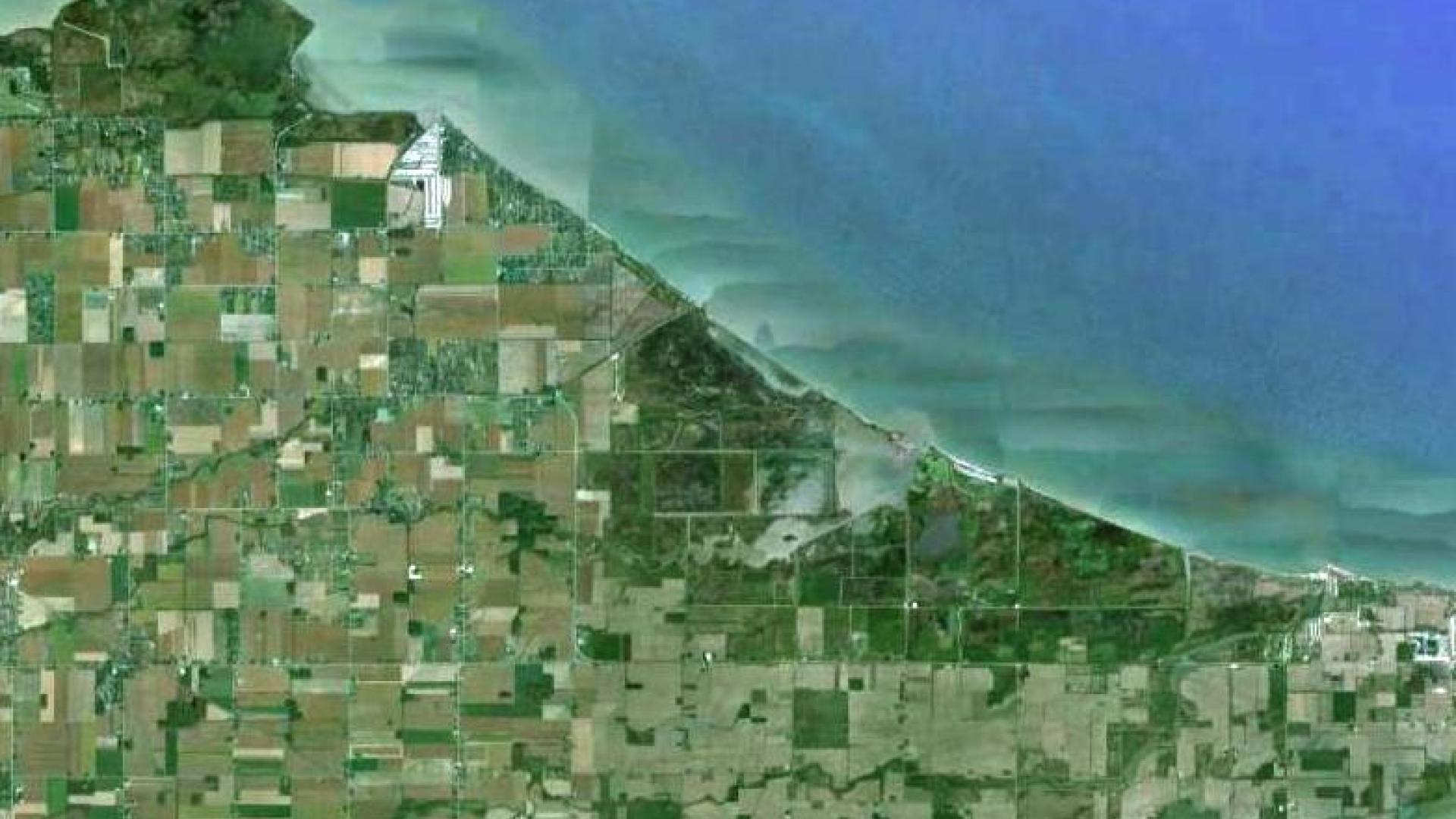 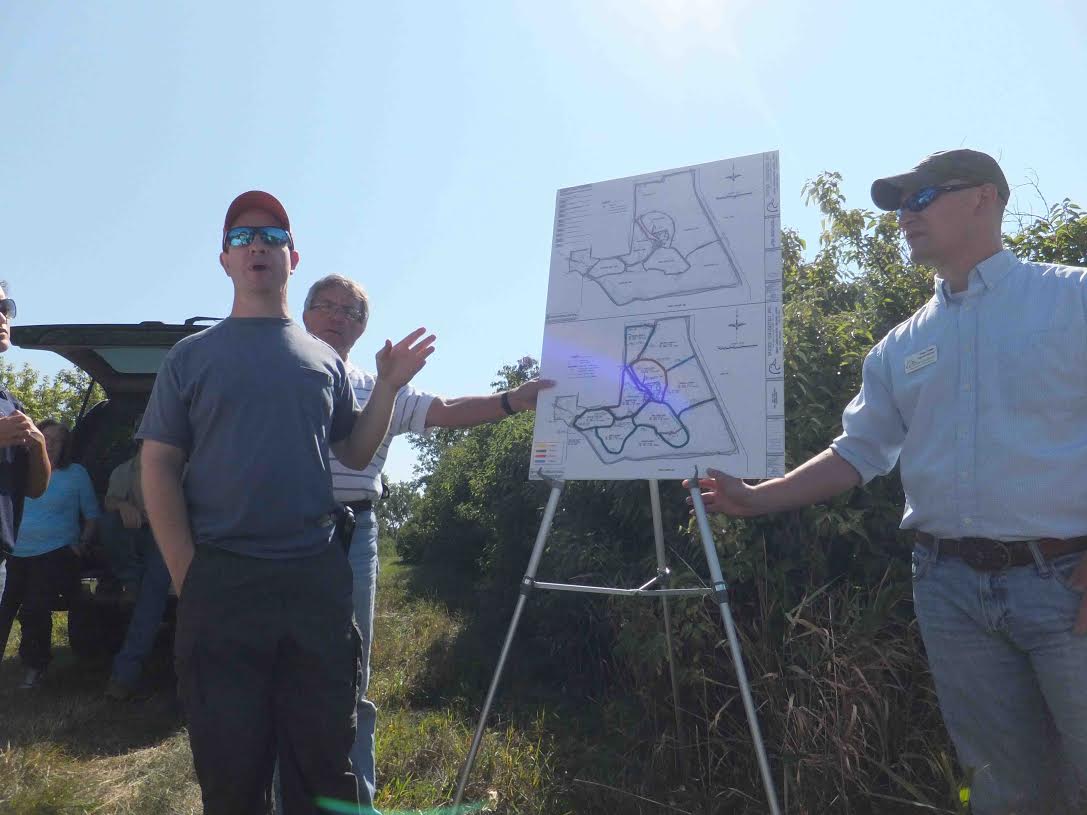 Restoration Director Chris May of The Nature Conservancy, left, explains the phases of restoration construction planned at Erie Marsh near the Michigan-Ohio border. Credit: Melissa Molenda/TNC.

What does a 95 percent loss look like?  Imagine losing 95 percent of your retirement portfolio. That would take another career to rebuild. What if we lost 95 percent of the water in the Great Lakes?  Every lake except Ontario would be bone dry.

The scenario seems pretty drastic, but it’s exactly where we are with the status of our wetlands in western Lake Erie --- from Point Pelee, Ontario, through Michigan and around to Sandusky, Ohio. For example, in northwestern Ohio, only 5 percent of Lake Erie’s original 307,000 acres of wetlands remain, and similar patterns exist throughout the rest of the western basin of the lake. These once abundant marshes have been extensively altered or destroyed due to development, conversion, and drainage by way of dikes, roads, railroads and shoreline armoring. The impacts of losing hundreds of thousands of acres of wetlands are substantial: fewer fish, fewer birds, murkier water, and ultimately fewer benefits to people and nature. 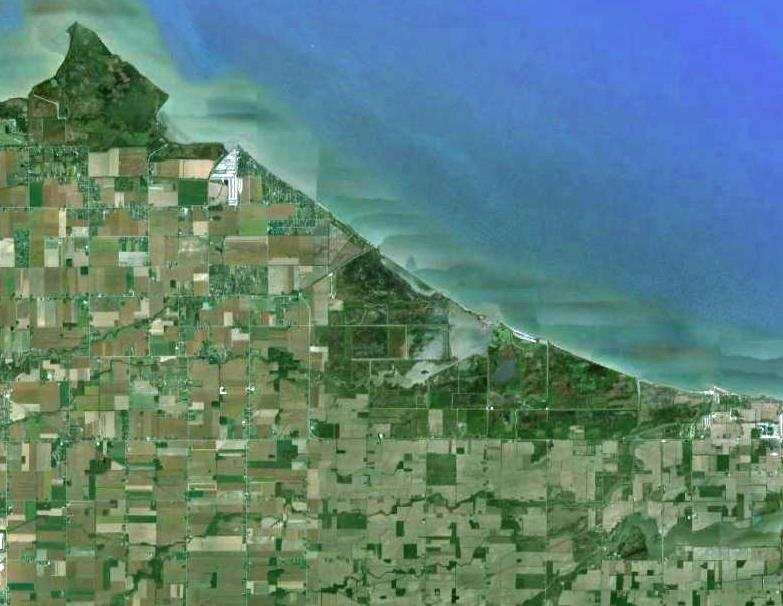 Coastal wetlands are indeed nature’s form of the Swiss Army knife. Across the Great Lakes, coastal wetlands provide habitat for fish and birds, filter pollutants from water, and protect our coasts from storms, water level fluctuations and subsequent erosion. There is little that they cannot do. In the field of conservation, coastal wetlands are the top provider of what scientists like to call “ecosystem services.”

For example, the wetlands of Lake Erie’s western basin serve as crucial habitat for fish and wildlife to breed, raise young, and replenish energy stores during migration. This results in a world-renowned sport fishery, waterfowl hunting heritage, and a phenomenal regional migration site for birds. In fact, the largest spring migration bird watching festival in the country occurs in the Toledo area.  In 2014, “The Biggest Week in American Birding,” generated $37 million for regional businesses.

But another very important role of coastal wetlands, especially for people who live there, is the water quality improvements that wetlands can provide.

What roles do they, or could they, play in improving the water quality in Lake Erie?

Restoration – Where, and How Much?

The Great Lakes, especially coastal areas, have been heavily impacted. In any restoration initiative, two of the most important questions center around “where” and “how much.” For western Lake Erie, there has been a suite of research and planning efforts designed to answer these questions. Our colleagues, Justin Saarinen, a research scientist at University of Michigan-Dearborn; and Kurt Kowalski, a research scientist at the U.S. Geological Survey-Great Lakes Science Center, have completed a Western Lake Erie Wetlands Restoration Assessment. It’s designed to map the wetland areas most suitable for restoration, and includes a series of data layers on soils, land use, and hydroperiod (the amount of time coastal lands are inundated by the lake).

This map guides the “where” question for restoration efforts. But “how much” restoration is needed?  To put it simply, we don’t know what our goal for coastal wetland restoration should be, especially in a region where we must balance the needs of nature and economic development. It all depends on the question: How much for birds, fish, or water quality?  A recently completed Lake Erie Biodiversity Conservation Strategy led by The Nature Conservancy, with the support of more than 200 partners, recommends a 10 percent increase (compared to the year 2011) in wetland area across the entire Lake Erie coastal zone.

The IJC adopted this recommendation in its Lake Erie Ecosystem Priority (LEEP) report, with a specific focus on Western Lake Erie. A 10 percent increase amounts to 2,584 acres (1,046 hectares) of restored and new coastal wetlands, which according to the LEEP report, was estimated to cost about $19 million, an investment likely to have short- and long-term ecological and economic benefits.

But the 10 percent increase is just a start. It represents an interim goal that was deemed reasonable by Lake Erie restoration experts. This goal is still in need of refinements that will help better estimate the ecological and economic benefits (such as healthier fisheries and bird populations, and nutrient uptake) received from wetland restoration.

A major gap in knowledge centers on the role of coastal wetlands in mitigating the impacts of nutrient loading, the major factor in the development of harmful algal blooms. We need more research applicable to the Great Lakes – research that examines the role of wetlands in trapping excess nutrients. Luckily some efforts are underway that will directly inform what role coastal wetland restoration will play in reducing nutrient pollution in Western Lake Erie.

However, we can’t let these gaps in knowledge impede progress. And success stories are emerging across this landscape.

The Nature Conservancy, along with Ducks Unlimited, the U.S. Fish and Wildlife Service, National Oceanic and Atmospheric Administration, National Fish and Wildlife Foundation, Michigan and Ohio state agencies, and the Erie Shooting Club are all key players in protecting and restoring western Lake Erie wetlands.

The Erie Marsh Preserve, located in southeast Michigan north of Maumee Bay, is in the midst of 946 acres of coastal wetland restoration. The Nature Conservancy is working with partners to complete the second phase of a four-phase project that is allowing water, energy and animals to pass freely between a restored wetland complex and Lake Erie. The design is aimed at restoring access to key spawning areas for ecologically and economically important fish species, while also improving habitat quality for migratory birds. 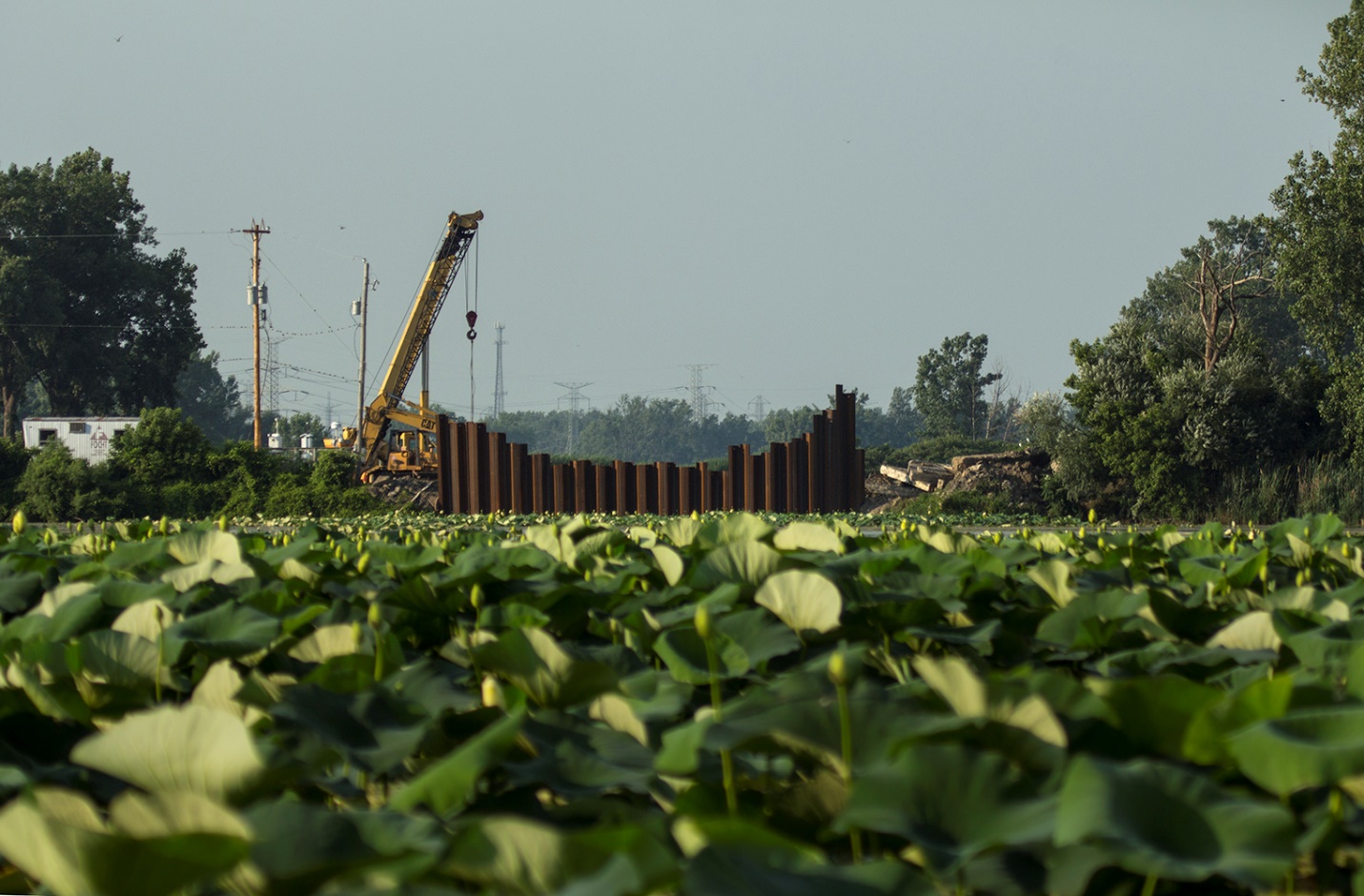 Construction on the first phase of Erie Marsh was completed earlier this year, which included the installation (pictured above) of a fish passage and water control structure. Credit: Jason Whalen. 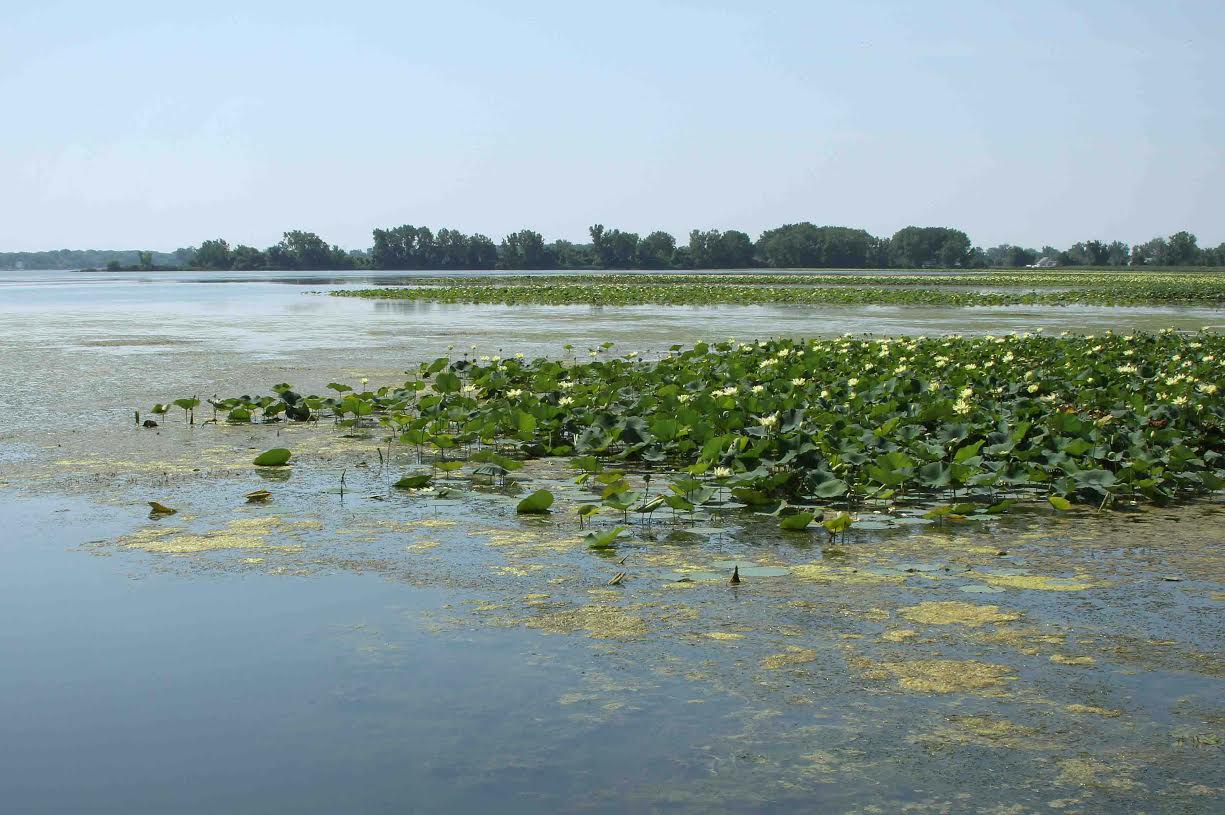 Once the first phase of reconstruction occurred, fish and waterfowl started returning to the coastal wetlands of the Erie Marsh Preserve. Credit: Jason Whalen.

The Ottawa National Wildlife Refuge, located in northwest Ohio, is restoring and enhancing 2,837 acres of coastal wetlands and uplands to provide fish passage, conserve globally significant migratory bird habitat, expand floodplains for the Toussaint River and Crane Creek and restore row-crop agricultural fields into uplands and wetlands in targeted areas. The goal is to increase natural cover, water-retention capacity, and ultimately water quality within the western basin. This work will directly contribute to the delisting of the Maumee Area of Concern. 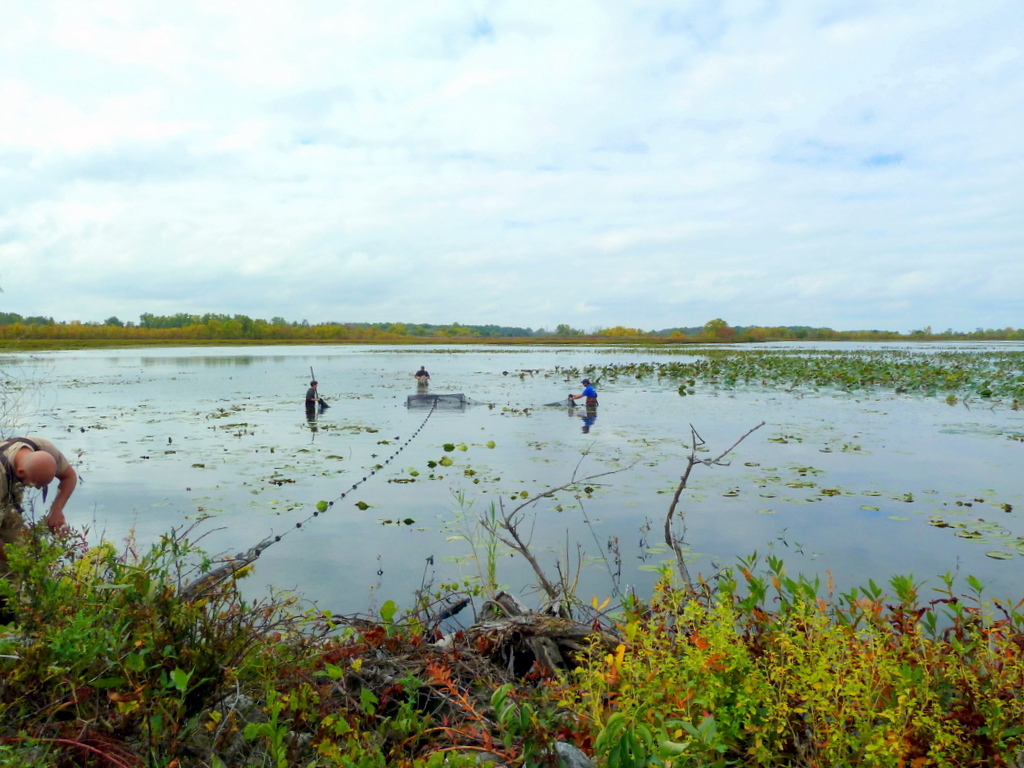 So, while we have lost 95 percent of our wetlands in western Lake Erie, the projects above, and other similar efforts, provide for a bit of optimism. In fact, in a 2013 report on the status and trends of coastal wetlands across the United States, the Great Lakes was the only region with a gain in wetland acreage. If we desire to avoid threats such as harmful algal blooms and restore the natural benefits of a healthy lake – the wildlife and recreational opportunities - we can’t lose our Swiss army knife. However, we must also view restoration in a holistic manner. Coastal wetlands will definitely not “fix” the harmful algal bloom problems – we must look to our agricultural and urban landscapes for that. But, they can be part of the solution, and one that brings the birds and the fish along. 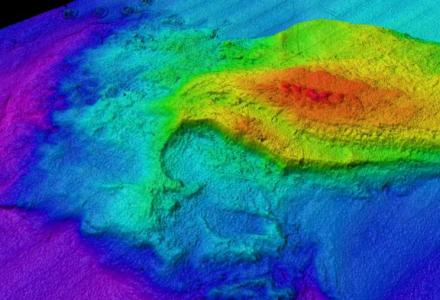 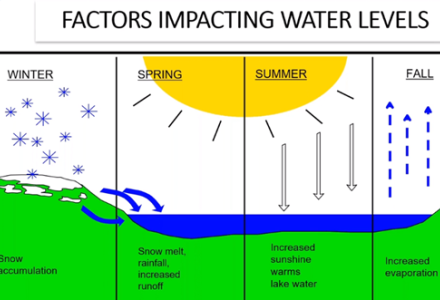 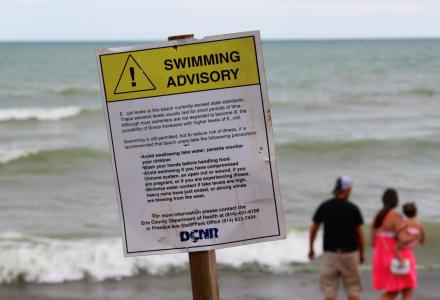