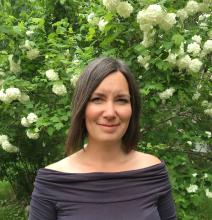 In addition to her role as a public member of the IRLWWB, Teika also serves on the International Joint Commission’s Climate Adaptation Working Group and is a member of the IRLWWB’s Engagement and Communications Committee and the Community Advisory Group.  Teika is a community developer, environmental advocate, and Executive Director of Transition Initiative Kenora (TIK) in Kenora, Ontario in Treaty 3 territory. She works with Treaty people in the Kenora area to support community-led solutions to climate change, water protection and clean energy.  Previously, Teika coordinated a six-year research collaboration (2009-2015) among two universities, the City of Kenora, and Grand Council Treaty 3 to build community and academic understanding of Treaty 3 and sustainability.  Since 2010, Teika has chaired the City of Kenora’s environmental advisory committee.  She is also a mom to two amazing children who are gamely humouring their parents on their adventure of off-grid living in rural northwestern Ontario.  Teika have an MSc in evolutionary biology from the University of British Columbia.