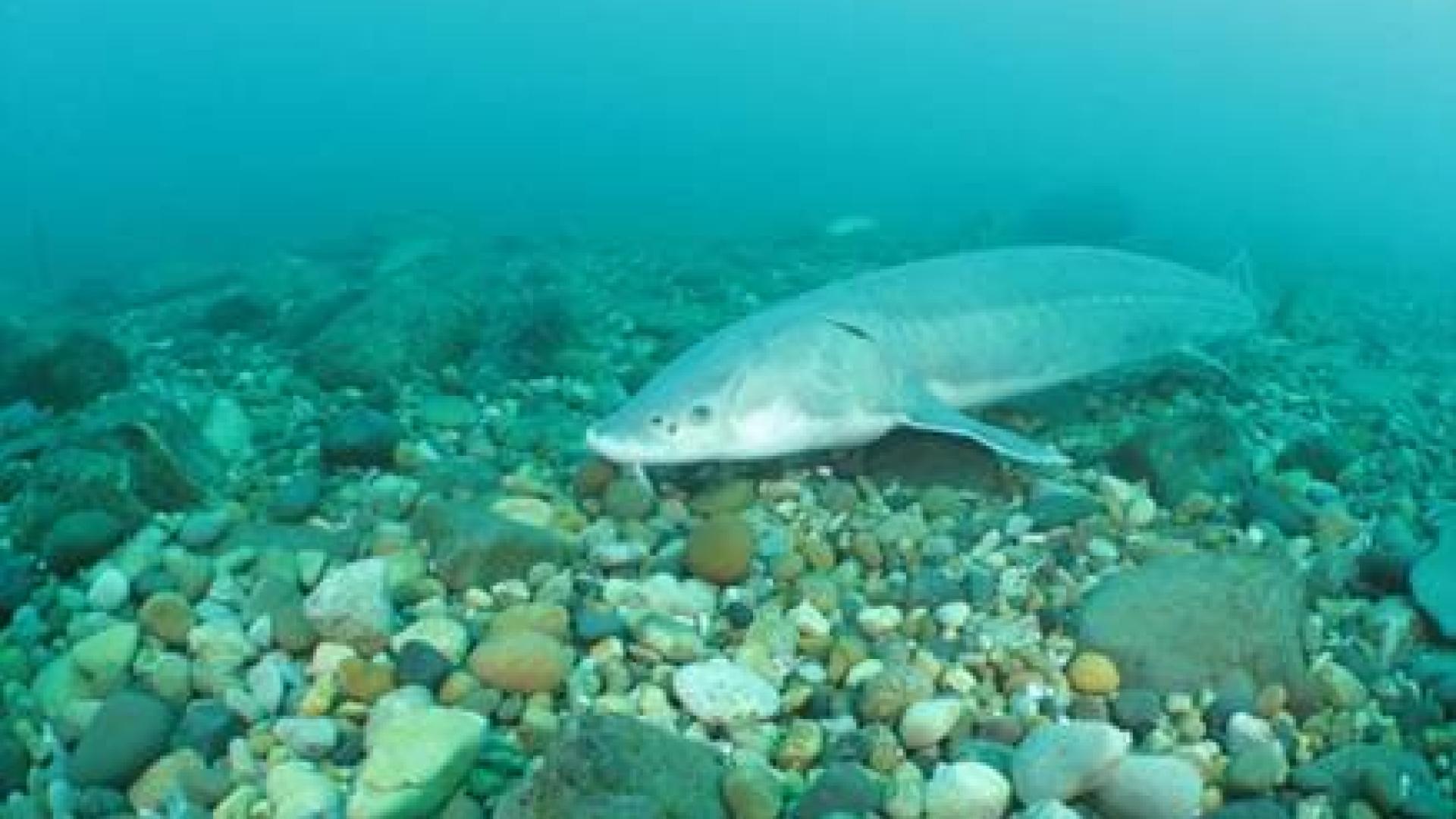 Lake sturgeon were once abundant in the Great Lakes basin before overfishing and habitat destruction in the late 1800s through the early 1900s decimated their numbers. Since then, a lack of suitable spawning locations for the sturgeon to lay eggs has been a major drag on recovery efforts.

So about 15 years ago, a group of interested researchers and organizations made the decision to build their own spawning rocky reefs mimicking the lost natural sites for the fish. Those plans to construct spawning grounds in the Detroit and St. Clair Rivers years ago are showing promising results now, University of Michigan Water Center Director Jennifer Read said.

The three initial spawning reefs, constructed off Belle Isle in 2004, were relatively small, 50-by-80 feet or about 37 square meters. The reefs were made with a variety of substrates and shapes to see which ones sturgeon used the most. The fish seek out loose rock with clean-flowing water located deep under the surface to lay eggs. While the rivers used to be filled with suitable spawning habitat, much of it was destroyed by dredging and construction of the shipping channel, Read said. Follow-up investigations found that sturgeon and other fish species, like whitefish, walleye and a variety of suckers, were at the reefs, with other species confirmed to be spawning.

Additional reefs were constructed in other locations within the Detroit and St. Clair Rivers with ample water flow. Reefs have been built near Fighting Island and Grassy Island in the Detroit River, and by Pointe Aux Chenes, Harts Light and the Middle Channel at the St. Clair headwaters. Read said there are now eight in total. A new one near Belle Isle is in the works that would be about five acres or 2 hectares.

“We’ve gone from a postage stamp to a fairly nice size,” Read said. “The impact of making navigable (waterways) and upland uses reduced good spawning habitat by 90 percent. There may have been 500 acres lost, so this may be a small percentage of what was lost, but it has a large impact on the fish.” With the eight reefs built, and a ninth at Belle Isle, the restored reefs will amount to around 20 acres or 8 hectares.

So far invasive species haven’t been a major problem at the man-made reefs, said Lynn Vaccaro, coastal ecosystem research specialist at the University of Michigan Water Center. The loose rock chosen is too large for parasitic sea lamprey tastes and too small for egg-eating round gobies to settle in any large numbers. While some invasive mussels have attached themselves to the rocks, they have not yet deterred the fish from using the sites to spawn.

Read said the new Belle Isle reef could cost more than $1 million from the Great Lakes Restoration Initiative just for the construction, including binational consultation, document preparation and oversight, but not pre- and post-construction assessments. Those assessments are valuable for narrowing down the criteria to find the right location for construction and seeing how the fish respond afterwards. One such assessment found that the Middle Channel site was getting silt on it, which affects sturgeon spawning.

Drouin said since it takes up to 25 years for sturgeon to grow into adults, it could take that long to determine if their population is growing based on the habitat restoration or if the fish are simply moving their spawning efforts to the reefs from elsewhere. Other species will need years of study as well, but if they are growing that could be important to fishery management.

Drouin said sturgeon are known to eat invasive zebra and quagga mussels, though at their current numbers they don’t eat enough to make much of a dent in their spread across the basin.

While urban development and modern shipping needs limits how much habitat can be restored in the river systems, Read noted every little bit helps in the effort to bring the Great Lakes’ largest residents back from the brink.