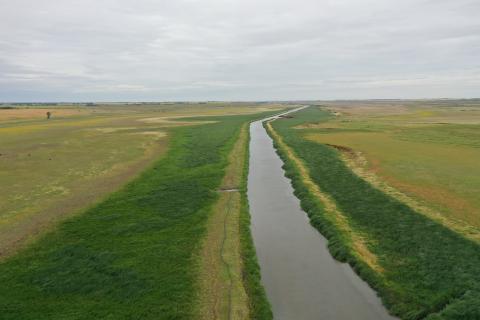 The International Joint Commission (IJC) is inviting public comment on recommendations made by the International Souris River Study Board (ISRSB) in a report that reviews the 1989 International Agreement between the Government of Canada and the Government of the United States of America for Water Supply and Flood Control in the Souris River Basin (the 1989 Agreement). Comments will be accepted at a public hearing to be held virtually on November 3, 2021 and by mail, email (Commission@ijc.org) and online from October 12th to November 15th, 2021.

Comments on the report can be made online, via email or by mail:

The ISRSB’s full report and an IJC highlights report can be found on the IJC website at the following link: www.ijc.org/srsb.

Location: Virtual (see the recording below)

The International Souris Study Board was established by the IJC in 2017 in response to a request by Canadian and United States governments. The request was precipitated by an unprecedented 2011 flood in the Souris River basin. The basin is part of the Prairie Pothole Region and stretches across Saskatchewan and Manitoba in Canada, and extends into North Dakota in the United States.

The governments asked the IJC to coordinate the full completion of the 2013 IJC Plan of Study, a post-flood activity. As part of this, the IJC was asked to evaluate and make recommendations regarding the Operating Plan contained in Annex A to the 1989 International Agreement between the Government of Canada and the Government of the United States of America for Water Supply and Flood Control in the Souris River Basin. Among other items, the agreement coordinates the operation of certain dams and reservoirs in the basin.

Although the study was precipitated by the historic 2011 flood, the basin also frequently experiences low water supply periods. The Souris basin is currently experiencing very dry conditions due to below average precipitation in the basin since fall 2020. Spring runoff also was below normal this year throughout the basin and conditions continue to be dry.

The study board findings and recommendations cover five themes:

The public hearing and comment period concern potential recommendations that the IJC will make to the Governments of Canada and the United States. The recommendations being considered include a suite of alternative measures for incremental or marginal improvements to the 1989 Agreement:

The Souris River Study Board report and its recommendations were developed from an expert review of operating plans of structures contained in the 1989 agreement. A Public Advisory Group, Resource Agency Advisory Group and Indigenous advisers also provided substantive input for the Study Board’s considerations in the development of the report. Public meetings and advisory group workshops were carried out on numerous occasions throughout the study.

Study experts analyzed the current operating plan using a range of scenarios in a reservoir simulation model. Potential alternatives to the current plan were evaluated for those scenarios in the model to determine if there could be improvements to the operation of the reservoirs. The report describes both the strengths of the existing plan and potential benefits and impacts of the refinements studied.

See all public comments and responses from the IJC