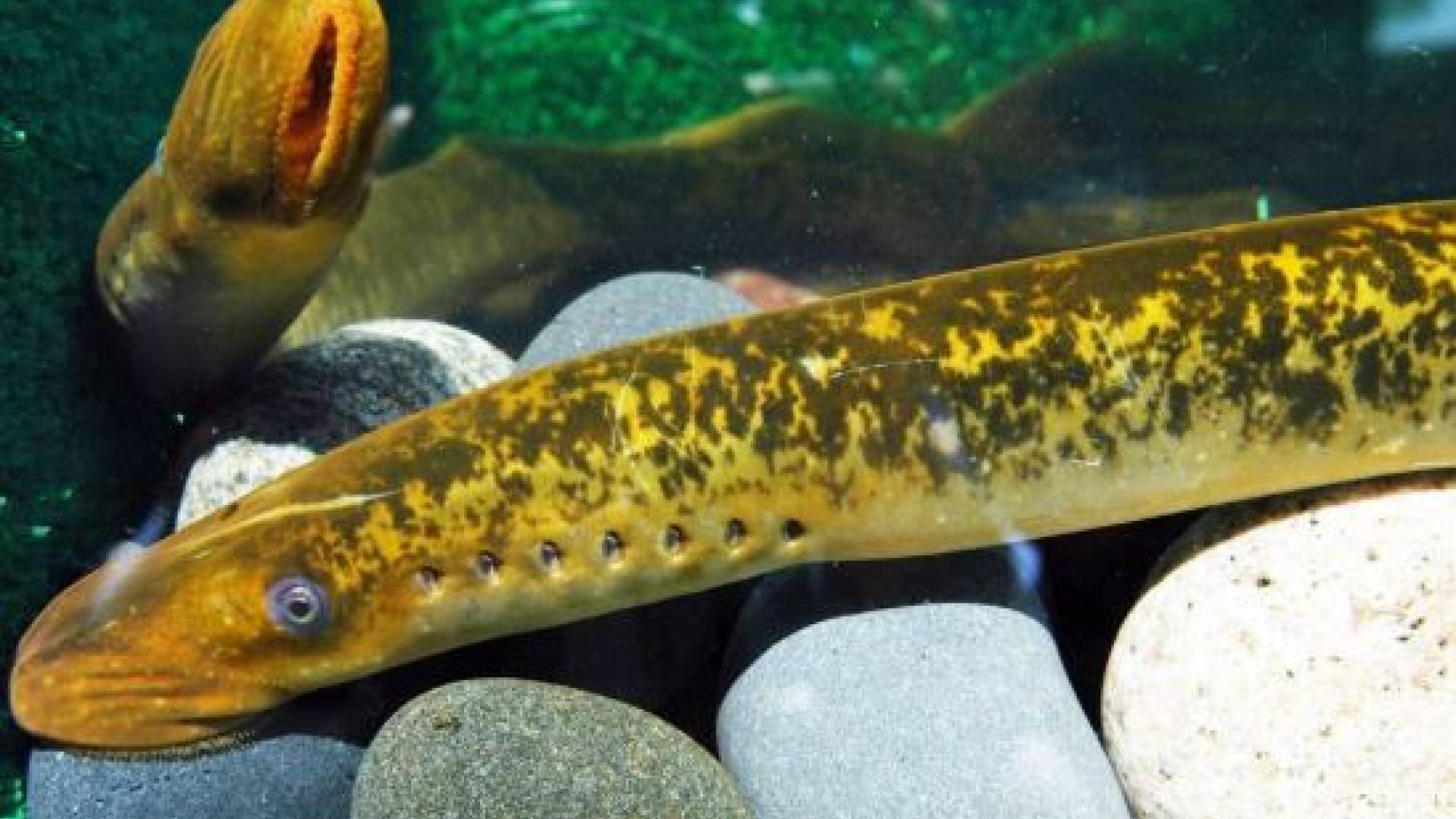 An invader in a massive freshwater basin. An uncountable number of spawning grounds. A fishery on the brink. A desperate search for a solution that ended up becoming the most successful aquatic invasive species control team effort in American and Canadian history. It’s not a movie, but rather the true tale of the sea lamprey’s invasion of the Great Lakes.

The sea lamprey is parasitic fish native to the Atlantic Ocean. As an adult, it latches onto other fish with its suction cup-like mouth, using a rasping tongue to cut into its victim to suck out bodily fluids and blood. In the Atlantic it doesn’t typically kill its hosts, but the fish in the Great Lakes have no such luck. It’s estimated that a single lamprey can destroy an average of 18 kilograms (39 pounds) of fish in its parasitic lifetime, with only about one in seven fish surviving a lamprey attack. It’s not to be confused with native lamprey, which are smaller and have different coloration, and don’t usually kill the host fish.

Sea lampreys were first detected in Lake Ontario in 1835. While there has been discussion on whether it is native to Lake Ontario, it most likely is an invasive species that entered through the Erie Canal, according to Marc Gaden, communications director for the Great Lakes Fishery Commission (GLFC), a binational organization funded by the Canadian and US governments. The 1919 reconstruction of the Welland Canal, which bypasses Niagara Falls to connect Lake Ontario to Lake Erie, likely allowed the sea lamprey to enter Lake Erie and on to the rest of the basin. They were discovered in Lake Erie in 1921, Lake Michigan in 1936, Lake Huron in 1937 and Lake Superior in 1939. The sea lamprey found an immense number of tributaries featuring the combination of rocky nesting grounds to lay eggs and silt for larval lampreys to grow in, making the Great Lakes a lamprey Eden. In its native habitat, the sea lamprey spends most of its life in saltwater, making it the rare species that has adapted to living entirely in freshwater systems like the Great Lakes, similar to the Pacific salmon species introduced to control invasive alewives.

The impact on the Great Lakes fishery was devastating. Prior to the invasion, about 20 million pounds or about 9 million kilograms of fish were harvested commercially each year in the upper Great Lakes – Superior, Huron and Michigan. By the 1960s that amount was reduced to about 300,000 pounds (136,077 kg) per year, while sea lamprey were killing close to 100 million pounds (45.4 million kg) of fish each year, and 85 percent of the remaining fish were scarred with lamprey attack wounds.

“Commercial fishermen and fishery managers first realized they had a problem around 1940, when it became clear what was happening to the Huron-Michigan fisheries from lamprey,” Gaden said. “That’s when the managers and scientists went into high gear and started seeking control measures.”

With little experience with aquatic invasive species, a wide variety of control methods were attempted. These methods included physical barriers to keep lamprey from entering the streams they use to spawn, crude electrical barriers to block their advances and sieves to stop larvae from eventually entering the Great Lakes from those inland streams. Entrepreneurs tried to make sea lamprey a commercially fished species for human consumption, but none of these attempts worked in stopping the sea lamprey.

The breakthrough came after years of searching for a chemical compound that would kill sea lamprey and not harm other organisms. A compound called TFM was discovered and field-tested in 1957, and entered management usage in 1958 through the binational GLFC. It has been used to great success.

The lampricide targets larval sea lampreys living in streams. After hatching from eggs found upstream in rocky areas, larvae make their way to silty areas and burrow into the substrate until they emerge as adults. The lampricide kills them in that weak, larval state by disrupting their metabolism before they can ever grow up to become the top predator in the Great Lakes. After decades of use, Gaden said the sea lamprey population in the Great Lakes has been reduced by about 90-95 percent from their peak in the late 1950s, and dropped the amount of fish killed by the lamprey to about 10 million pounds (4.5 million kg) a year. While it also affects native lamprey species, sea lamprey larvae tend to live and spawn in different areas from the native species; fishery managers focus on those stream areas where sea lamprey larvae burrow to minimize the impact on native species.

Lampricide isn’t the only tool used to control lamprey numbers, Gaden said, as good pest control takes multiple tacks. Physical barriers are still in use to deny lampreys a path to their preferred spawning grounds. And if those lampreys can’t reach a place to spawn, there’s no need use lampricide treatments, which is expensive and time-consuming. The GLFC also deploys traps to catch lamprey entering or leaving the streams to remove them from the system, and has tested sterilizing male lamprey in the St. Marys River to try and overwhelm the number of fertile males. Most recently, Gaden said the GLFC “is on the cusp” of using isolated lamprey pheromones to affect their behavior – drawing lamprey away from ideal spawning locations and toward traps.

“We’re working on unlocking their genome,” Gaden said. “There are things within the lamprey genome we can exploit, like create conditions so they only produce males, but that’s further into the future.”

Mark Burrows, physical scientist and project manager in the IJC’s Great Lakes Regional Office, said the GFLC has sponsored important research devoted to controlling and eradicating sea lampreys while protecting native species, much of which was highlighted at the recent International Association for Great Lakes Research conference in Detroit.

“They deserve a lot of praise for the progress they have made in combatting this destructive invasive species, and I look forward to the GLFC forging another 10-fold decrease in lamprey numbers at some point in the future,” Burrows said.

While a focused and targeted approach to invasive species can work in smaller inland lakes, the size of the Great Lakes makes controlling aquatic invaders difficult. That they invaded a waterway that also serves as a border between Canada and the United States added an additional wrinkle. It meant both countries needed to work together, even though fishery management is primarily the domain of state, province, tribal and First Nation governments. This team effort has kept sea lamprey from completely dominating the ecosystem of the Great Lakes for decades.