Caption
The Cuyahoga River flows through Cleveland on its way into Lake Erie, picking up chloride along the way. Credit: Neal Wellons

Separate studies in Ontario and Ohio suggest that increasing urbanization over the past 40 years has been a driving factor in freshwater rivers getting saltier.

Over the decades, southern Ontario and Ohio’s Cuyahoga River watershed urbanized rapidly as cities grew across the landscape. More concrete roads, sidewalks and other infrastructure were treated in the winter months with road salt to prevent ice from forming.

Road salt typically consists of magnesium chloride, potassium chloride or sodium chloride. Over time, salt-laden water runs off either into the sewer system or directly to streams and rivers. Additionally, calcium chloride also is used to suppress dust on roads, while aluminum chloride is used to treat impurities from wastewater.

While it is unlikely that salt concentrations in the Great Lakes would render the water undrinkable for people, too much chloride (a catch-all category for these salts) can affect the taste.

And,  high enough concentrations of chloride in streams and lakes, can affect native species such as lake trout or lake whitefish, which have limited abilities to survive in saltier, brackish water. Saltier water also can make it easier for nonnative species, such as red marine algae or the round goby, to establish themselves and spread.

Since 1974, the US Geological Survey has been working with Ohio’s Heidelberg University to sample tributaries entering Lake Erie or the Ohio River.

Douglas Kane, a Heidelberg researcher, went through decades of data for the Cuyahoga, Maumee and Sandusky rivers to see what the long-term trends are regarding chloride in the water.

The Cuyahoga River stood out, Kane said, with increasing chloride concentrations over time.

“In the beginning of the record, the (amount of chloride in the) Cuyahoga was on average 100 milligrams per liter (mg/l) in the winter,” Kane said. “But now it’s around the 200 mg/l range, so it’s at least twice what it was, and compared to the other rivers—it’s much greater.”

Canada and the United States have water quality criteria for chloride to protect aquatic life.

Kane said the Maumee and Sandusky rivers maintained a steady amount of chloride in the water over the monitoring period–about 40 mg/l. Both of these are largely rural streams, whereas the Cuyahoga River flows through the developed areas of Akron and Cleveland.

Kane said this gives a pretty good indication that increasing chloride amounts are linked to urban and suburban development along the Cuyahoga basin over the past 40 years. This was not an isolated issue, he added, as Environment and Climate Change Canada’s monitoring stations on the Niagara River at the eastern end of Lake Erie also found chloride concentrations increasing over this same time period.

Similar signals have appeared on the northern shore of Lake Erie in southern Ontario. A study published in Environmental Research Letters in August 2021 looked at datasets going back to 1964 collected by the Ontario Provincial Water Quality Monitoring Network. Researchers primarily sampled most of the waterways  in the summer, though they focused the project on those that also had ample winter samples—about 10 streams and rivers with data from 1965-1995 and 15 from 2002-2018. Only two sites, Moira River and Jackson Creek, appeared in both sample groups.

Similar to Ohio, this study found chloride concentrations increasing in urban regions of the province year-round, said project leader Bhaswati Mazumder, a doctoral student at Ryerson University. But rural streams and rivers also consistently had levels of chloride that held steady or increased seasonally, with higher rates of change in winter.

Some watersheds maintain elevated chloride concentrations into the summer, when no road salt is being applied, and in few cases the summer concentrations are increasing, Mazumder said. The study tried to parse how much of these upward trends are due to urban growth, changes in road salt application rates, and/or legacy chloride contamination stored in the regions’ rich soils and groundwater. Urban growth did not explain all of the upward trends, which suggests that changes in management and/or legacy chloride are a big part of the problem.

“It seems like what we’re putting in is not going anywhere,” Mazumder said. “It’s just delayed transport in the subsurface, and then (the chloride is) slowly making its way to streams later on.”

Mazumder said future water quality models need to take long-term changes in streamflow into account given how dramatically flows can change based on the season and weather—particularly with climate change affecting precipitation patterns in Ontario and elsewhere. Part of an update would likely involve developing models specific to a stream and its flow pathways. Mazumder also noted the need for more accessible long-term flow data and water quality monitoring in Canada.

In Ohio, Kane plans on compiling Ohio Environmental Protection Agency data from additional waterways. This includes creeks and streams that feed into the major rivers he looked at to help pinpoint hot spots where chloride is coming in. Kane also hopes to obtain information for other waterways with high chloride levels, such as Wolf Creek, which runs through Toledo, and Coldwater Creek, an agricultural stream. Kane and his collaborators, Drs. Laura Johnson and Nate Manning from the National Center for Water Quality Research, are submitting their work to the Journal of Great Lakes Research. 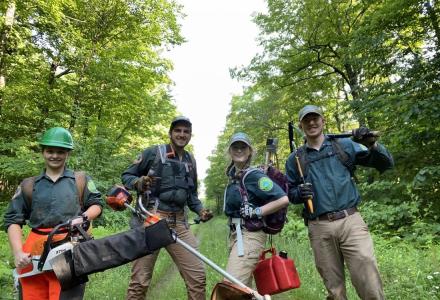 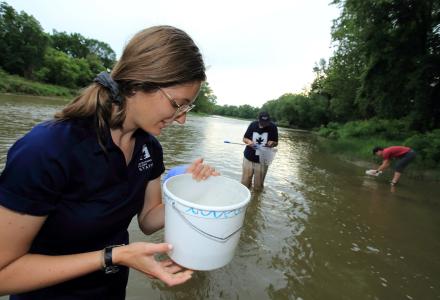 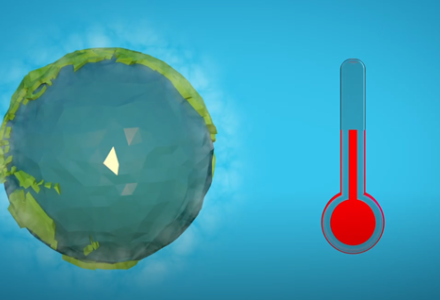