A unique project to fight invasive plants and restore native species at a popular birding destination in Buffalo, N.Y., will help inform similar projects at sites across the Great Lakes and the nation.

The Buffalo District of the U.S. Army Corps of Engineers and the U.S. Army Engineer Research and Development Center are collaborating on a demonstration project to control the growth of four invasive plants at Times Beach Nature Preserve in Buffalo.

Times Beach, a 45-acre confined disposal facility (CDF) built by the USACE, was used to place dredged material from the Buffalo River federal navigation channel from 1972-1976. In 1976, the USACE began using a new facility.

As vegetation communities established themselves in the 45-acre area, Times Beach became a popular birding destination. But not all vegetation that became established was desirable, and Times Beach has since become overrun by invasive plants that have led to poor quality habitat and a decline in birding at the site.

“The project is specifically looking at Japanese knotweed, mugwort, common buckthorn, and the perennial grass phragmites, all non-native species,” said Craig Forgette, Buffalo District project manager. “Most of the team’s focus will be on phragmites, given that it covers over one-third of the site and that it is a difficult invasive plant to control.”

Phragmites is a tall perennial grass found on every continent except Antarctica and ranges from the tropics to temperate regions around the world. While some phragmites species are native to the region, the type of phragmites found at the Times Beach site is thought to be Eurasian in origin, introduced through ports along the Atlantic.

“When we first looked at doing a demonstration project, we looked at other control projects and noticed they did not show quantifiable success or failure of invasive plant species treatment from start to finish,” said Tony Friona, project liaison for the U.S. Army Engineer Research and Development Center. “Understanding the need for a complete start-to-finish study, we developed a five-year plan to combat the invasive species and quantify the effectiveness of our process.”

The project started with an analysis of seeds from the area. Seeds of 41 different species of plants were found, 22 of them native, many being remnants of the plant community that phragmites had displaced. Standing phragmites shades out native plants below and fallen phragmites chokes out plant species below it.

The next phase of the demonstration project was to develop an integrated pest management approach to plant management. This plan provides a timeline for mechanically cutting and removing large amounts of invasive species from the site as well as herbicide applications.

What makes the Times Beach project unique is that the phragmites treatment has been split into three sections for the project, to gauge the level of effectiveness of each treatment, and each method’s ability to restore native plants.

There will be three chemical treatment sections using glyphosate, imazamox, and a combination of the two.

“The integrated pest management process, and the team’s rigor to the process, is what will set our project apart from all others,” Friona said. “After collecting five years of data, we will have a better understanding of what works, what doesn’t work, and how to effectively implement invasive pest management at other sites across the Great Lakes and the nation.” 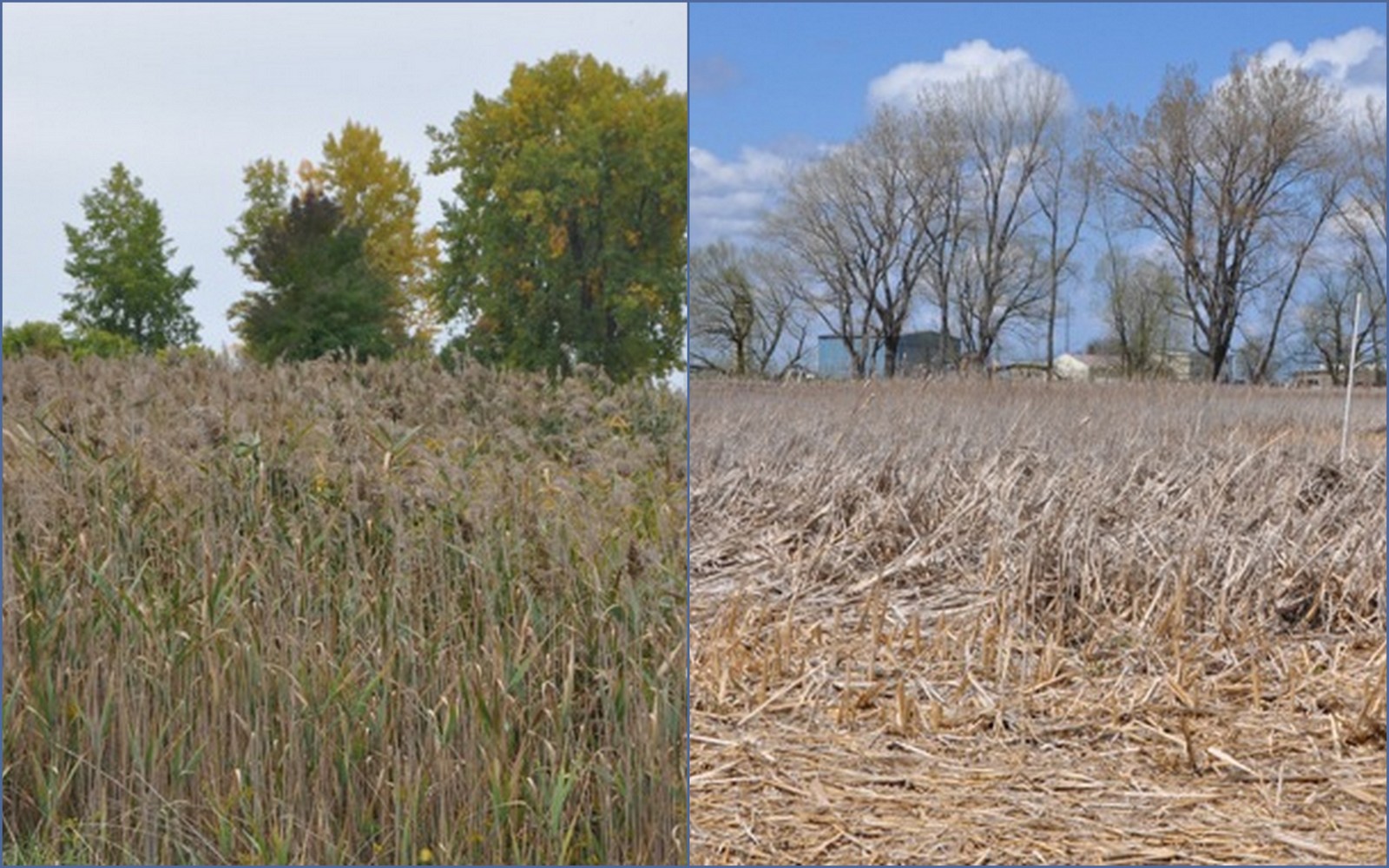 “Observations after the first mechanical cutting and herbicide treatment show a noticeable difference at the site, and each year should see a reduction of phragmites biomass,” said Kris Erickson, with Ecology & Environment Inc. “Plant surveys conducted at Times Beach in summer of 2014 after initial mechanical and chemical treatments have identified significant  regeneration of native emergent marsh species such as pale and swamp smartweed, monkey flower, softstem bulrush, water plantain, yellow nutsedge, cattail, boneset, white and blue vervain, and wild mint.”

Working close to nature has presented its own set of challenges. The ecosystem restoration project team recognized the need to remove and treat the invasive plants, but not disrupt the wildlife at the site.

Before and during the work, bird surveys have been used to ensure populations are not harmed. Bird surveys also will be used as indicators of change in ecological function of the site as the project progresses, Forgette said.

As the demonstration project progresses, mechanical and chemical treatment will still be part of annual plans, but a third phase of revegetation will be added. During revegetation, native plants found in the seed bank will be planted in place of the phragmites, along with additional native species found in similar, nearby ecosystems.

By the end of the five-year demonstration project, Times Beach will be on a path to re-establishing its importance to the Great Lakes, not only as an important birding sanctuary along the Niagara River Greenway corridor, but as a model of success that can be repeated.

“Being able to remove the invasive species from Times Beach and restore the native population is a great story, but the true measure of success and the real story is yet to be written. Once the work of the ecosystem restoration project team has gathered, analyzed, shared, and replicated across the Great Lakes and nation, we will truly see just how important the Times Beach Aquatic Invasive Species demonstration project was,” Friona said.