Predicting and Preventing the Spread of Hydrilla 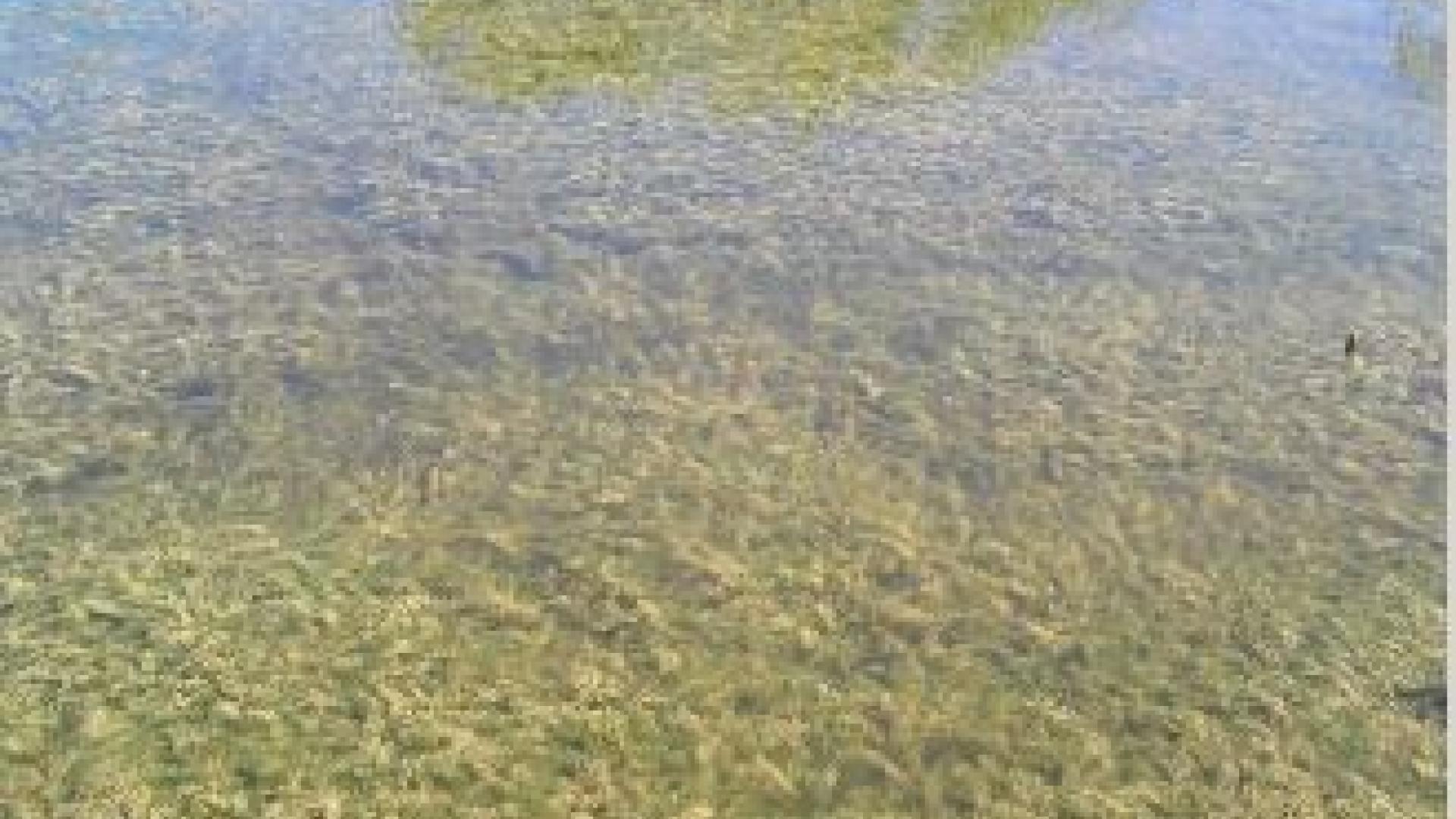 Caption
A mat of invasive hydrilla found in West Creek in the Cleveland Metroparks system in August 2011. Credit: Jennifer Hillmer

A virulent, hardy, and aggressive aquatic invasive plant has been working its way north, approaching the Great Lakes in a few spots. The plant, called hydrilla, is the target of a binational effort to understand its spread and how it can be dealt with before it gets established. In states like Ohio, its encroachment on the Great Lakes has prompted lengthy eradication efforts as close to the shoreline as Cleveland, and research to better predict its movement in coming years. In Ontario, officials are working to keep the province hydrilla-free.

Hydrilla will root itself into sandy and rich, mucky beds of whatever water body it has settled in and can grow stems up to 30 feet (9 meters) in length, forming dense mats near the surface. Each stem has whorls of small, serrated leaves visible to the naked eye. The plant outcompetes native species for nutrients and can survive a variety of conditions, said Mark Warman, hydrilla project coordinator for Cleveland Metroparks.

It can tolerate less sunlight than native plants, low carbon dioxide environments, and could take advantage of the phosphorus and nitrogen runoff into Lake Erie to expand. It can settle into water up to 49 feet (15 meters) deep and is capable of overwintering in cooler environments like those around the Great Lakes.

Additionally, hydrilla has several reproductive and survival strategies. Warman said in addition to seeds, hydrilla can grow from fragmentation – if a piece of the plant is broken off, both parts may continue to grow, with the free-floating piece attempting to root itself again. Waterfowl can be a vector for transportation, and studies have shown that hydrilla tubers can survive and grow after being regurgitated. Finally, it overwinters with the help of tubers and leaf buds called turions that can be moved in a sediment washout or flood event.

“The biggest risk is fragmentation on fishing equipment and on boats and trailers,” Warman said. “We advocate for proper training in boat inspections and providing infrastructure to properly clean boats, and we let the community know to clean, drain and dry their boats.” Hydrilla could readily spread at a boat ramp or marina, rendering it difficult to move a boat through without some plant management, he added. The US National Oceanic and Atmospheric Administration notes that hydrilla has caused millions of dollars in damages to irrigation and hydroelectric power projects in the southeastern United States, with the local fishing and tourism industries also taking a hit.

The dense hydrilla mats along the water surface can cause problems not only for boaters and anglers, but also for irrigation and water intake systems, said Francine MacDonald, senior invasive species biologist with the Ontario Ministry of Natural Resources and Forestry (MNRF). The mats also can hurt fish abundance and distribution in the areas they’re found as they change the habitat around them and crowd out native plants, MacDonald said.

Besides watercraft, the water garden trade is another major avenue for hydrilla’s spread, Macdonald said. Hydrilla can be mistaken for other species or mixed in with the roots of other pond plants. The species is prohibited under the 2016 Ontario Invasive Species Act, which makes it illegal to import, possess, deposit, release, transport, grow, buy, sell, lease or trade in the province. The act also includes measures to help control and eradication responses in case it’s found in Ontario, though so far it hasn’t been detected north of the United States.

Completely eradicating the plant in a specific area isn’t easy. Warman said hydrilla was first detected in 2011 at the Cleveland Metropark system in the Cuyahoga River watershed in six locations (all artificial wetlands), and a rapid response plan went into effect to begin hitting it with herbicide. Those treatments, using fluridone-based herbicides, can take seven to 10 years to complete. This year they’ve only found a single tuber; 2016 was the last year his staff found any vegetative hydrilla at the initial discovery site.Other than herbicide, hydrilla control methods are a mixed bag, according to information from New York Sea Grant and Cornell State University.

Mechanical cutters are expensive to run (around US$1,000 per acre) and there’s a risk that fragments could be carried elsewhere; the same is true of suctioning out the plants using vacuums. Biological control using other nonnative species is risky and has seen mixed results in Florida; while grass carp has been successful in small lakes it is a nuisance otherwise in the Great Lakes. Drawing down water levels, where possible, can dry out hydrilla, but the tubers can survive to grow once water levels increase again, and other native plants could suffer in the meantime.

Additional searches outside of the metroparks in the Cuyahoga River watershed haven’t turned up any additional plants, but Warman is vigilant. While the species is federally prohibited for trade and sale without a permit in the US, he believes it initially turned up in the metroparks when it was illegally dumped with other aquarium plants.

Even if hydrilla isn’t around the Ohio metropark now, it has continued to creep its way north from the southern United States. Kristen Hebebrand, a master’s student at University of Toledo, has been studying and modeling how hydrilla has spread north, alongside other researchers working on a risk assessment for the US Army Corps of Engineers (USACE) Buffalo District, the USACE’s Engineering Research and Development Center, Texas Technical University, North Carolina State University, and Ecology and Environment Inc.

The assessment is being prepared to identify locations most vulnerable to invasion by hydrilla within the Great Lakes, based on likelihood of introduction and environmental suitability. The assessment and related research work is being done under the USACE’s Aquatic Plant Control Research Program and is funded by the US Great Lakes Restoration Initiative.

The modeling is built on a watershed-by-watershed basis within the United States, focusing on accidental overland transportation by recreational boats. Overall, Hebebrand said, hydrilla is expected to continue to spread in areas with current infestations, and the watersheds surrounding those will be at a higher risk of infestation. While her study isn’t complete, initial results discussed at the International Association of Great Lakes Research (IAGLR) conference in June suggests its biggest gains by 2025 will be in watersheds just south and on the western end of Lake Erie, the St. Clair-Detroit River watershed, and in watersheds around southeastern and southwestern Lake Ontario, which are already infested. Hydrilla also is expected to increase around the Ohio River and the Susquehanna watersheds south of Lake Erie, according to the ongoing study.

Once the risk assessment project is complete, Hebebrand hopes managers and officials can use it to make more informed decisions about early detection and where to prioritize monitoring efforts for hydrilla. Hebebrand said her portion of it should be finished within a few months, but the work is ongoing.

MacDonald said MNRF is working with a binational invasive species program to document the spread and help find hydrilla and other invasive pests, called the Early Detection and Distribution Mapping System. Alongside an Invading Species Hotline, MacDonald said it’s an important tool to enable citizens and conservation groups to report potential hydrilla sightings and other invasive plants. The MNRF also is studying using environmental DNA to help support early detection before plants themselves have been spotted.

The US Army Corps of Engineers Buffalo District is working with Ecology and Environment Inc. to develop a basin-wide collaborative initiative to fight hydrilla. It’s in the early stages, but Ecology and Environment hopes to have a website up to provide a place for managers to share lessons learned and technical information in coming months.

Finally, there are formal commitments from Great Lakes governors and premiers to prevent and respond to aquatic invasive species together, including hydrilla. MacDonald said this includes a mutual aid agreement to combat shared threats within the basin – though so far Ontario has not been asked to assist with any hydrilla eradication efforts. Information on control efforts is shared regularly through organizations like the Great Lakes Panel on Aquatic Nuisance Species and the Conference of Great Lakes St. Lawrence Governors and Premiers’ Aquatic Invasive Species Task Force.