More Shared Waters Being Matched Up in Binational Mapping Project 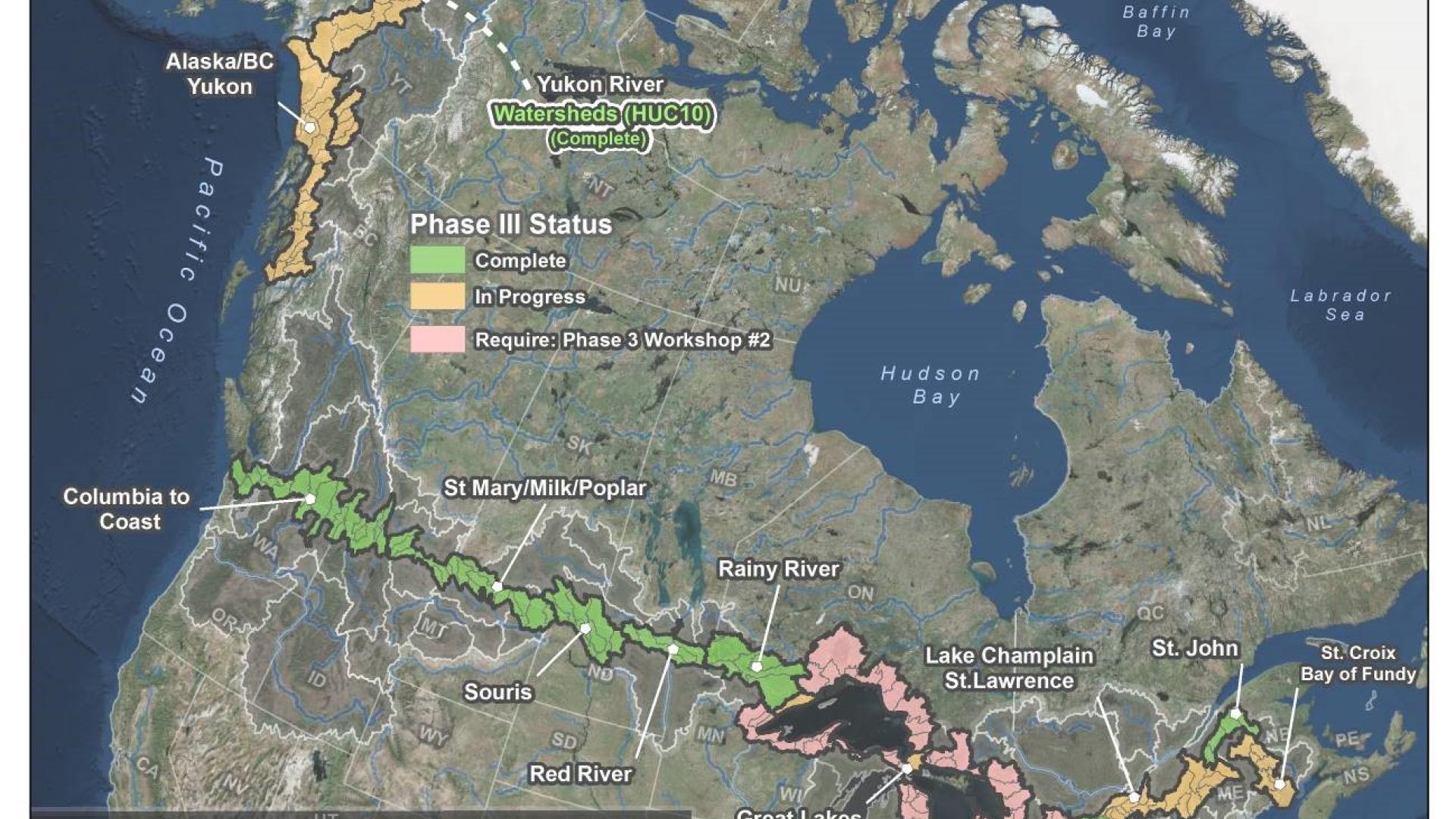 The IJC might not exist if water stopped at the border between Canada and the United States. But rivers, streams, and lakes are not restricted by political boundaries, and for two nations and their governments to effectively manage water systems, adequately prepare for floods, apportion water and monitor climate change, they need to look at the big picture. That’s where the IJC’s data harmonization efforts come in.

As of January 2018, the IJC’s Transboundary Hydrographic Data Harmonization Task Force is finishing development of hydrologic units in the Upper Saint John River, Lake Champlain, and the Richelieu River, and will be turning its attention to complete ongoing efforts in the Great Lakes, Lower Saint John, and the Alaska-Yukon-British Columbia regions. This is only the latest step in work that started a decade ago. Prior to the harmonization effort in 2008, Canada and the United States had haphazard watershed data from across the border that didn’t match up.

In the United States, that data stopped at the border with Canada, and in some areas watersheds hadn’t even been mapped out fully, said Kim Jones, physical scientist and Watershed Boundary Dataset (WBD) national technical coordination lead with the US Geological Survey (USGS).

Judy Kwan, a GIS scientist with Environment and Climate Change Canada (ECCC), said Canadian datasets sometimes stopped at the border and sometimes extended across into the United States, but didn’t match US watershed data when they did. Each country also had its own measurement units that weren’t a one-to-one match.

Since 2008, the task force has been harmonizing distinct sets of national geospatial hydrography and drainage-area data within the transboundary “swath,” a stretch of watershed drainage areas straddling the border between the two nations. The goal is to create seamless, hydrologic networks and associated drainage areas, known as “hydrologic units,” which both nations can use for a variety of hydrologic modeling, mapping, and reporting needs.

Getting these projects underway involves bringing together federal, provincial and state experts, said Mike Major, project manager for Natural Resources Canada’s Centre for Mapping and Earth Observation. In some cases, this can involve French and English language barriers that need to be overcome, such as in the Richelieu River-Lake Champlain watershed between New York, Vermont, and Quebec.

Once those hurdles have been worked out, the task force compiles as much available data and resources as possible from the partners, including hydrography and elevation information, Major said. The task force combines all these materials to create rough draft hydrologic units - basic ideas for what those units could look like - before holding workshops with experts to review, discuss, and come to a consensus on more finalized draft boundaries.

The approved draft concept boundaries are then used to develop harmonized hydrologic units which are provided to workshop attendees for final round of agreement before being incorporated into each nation’s geospatial data holdings – specialized maps mapping the surface water of Canada and the United States.

The seamless transboundary hydrography data, which was completed in 2014 and is now in an update and maintenance phase, is available in the Canadian National Hydro Network (NHN) and the US National Hydrography Dataset (NHD). Seamless transboundary hydrologic unit data are delivered via the US WBD. The task force wants to make sure that users, technical experts, and map makers have access to this data and know how it can be used, so information and help with locating data is available in a USGS-hosted website, said Jones. Canadian National Hydro Network data is available through Canada’s Open Maps portal. US NHD and WBD data can be accessed via the NHD website.

It’s a lot of work to coordinate all these agencies and governments to harmonize this data, but there’s value in it. USGS Physical Scientist and WBD National Team Lead Susan Buto said before the harmonization effort, it was difficult to assess or model water quality or quantity in the transboundary region, as well as to assess the risk factors for hazards like flooding. In transboundary regions that face any combination of those issues – such as Lake Champlain and the Richelieu River, or the Souris River, it’s difficult to come up with approaches to dealing with water-related issues without accurate and seamless hydrography data.

Major added that in addition to assessing the health of water resources and watersheds, the harmonization work is necessary for preparing for the effects of climate change and figuring out the best way to improve adaptation. Each area will see its own specific changes and challenges to the water cycle and aquatic ecosystems due to climate change, he said.

“Whether its water quality issues for identifying the stressors on water resources – runoff from agriculture or other sources – resiliency to climate change, determining habitat loss, the spread of invasive species,” Major said. “These are all important for management of water resources, and the base of it is information about hydrography.”

In some areas, the initial scope of the project has been expanded to include contributing drainage areas beyond the bi-national swath to help develop the NHDPlus High Resolution (HR), said Peter Steeves, physical scientist with the USGS.

Called by Major “currently the best hydrographic data program in North America,” the NHDPlus HR, being produced for the contiguous US, is a scalable geospatial hydrology framework that includes a stream network, elevation-based catchments that link the landscape to the stream network, and data layers for understanding the flow direction and accumulation of water across the landscape. This framework will support a host of uses, such as more accurate water quality modeling, better information for designing new bridges and culverts, and higher resolution flood forecasting. Ultimately, Major said, he’d like to see a unified hydrography data model used across North America by bringing Mexico into the fold as well – though any such collaboration is still to be determined.

Canada and the United States are involved in a variety of cooperative mapping projects – from roads to energy infrastructure – but thanks to this data harmonization project, natural water systems may be one of the most advanced efforts despite being incredibly complex. 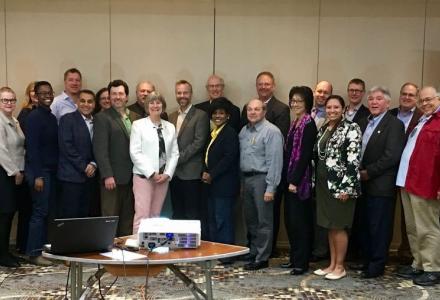 Highlights from the 2018 Spring Semi-Annual Meeting 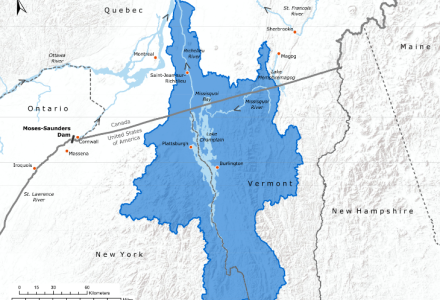 Flooding and Water Quality: A Tale of Two Studies 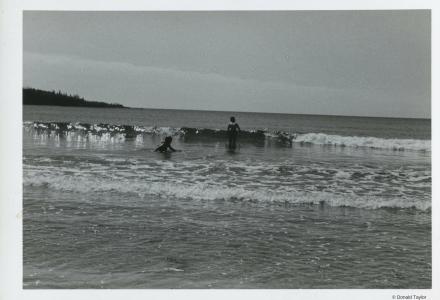 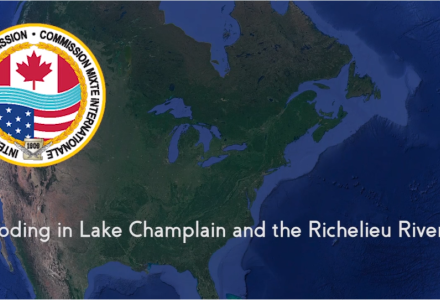