Conditions across the Great Lakes were drier this past month and the water levels of both Lake Superior and Lake Michigan-Huron declined more than they typically do in February. Nonetheless, an exceptional volume of water remains in the system and all of the Great Lakes remain near or above record-high water levels for this time of year.

Water levels are expected to remain high over at least the next several months and further record-highs are possible if wet conditions continue in 2020. As a result, there will continue to be a significantly increased risk of shoreline erosion, lakeshore flooding and coastal damages over the next several months. The International Lake Superior Board of Control (Board) advises all those that may be affected to prepare for potentially severe coastal impacts, especially during periods of strong winds and high waves. 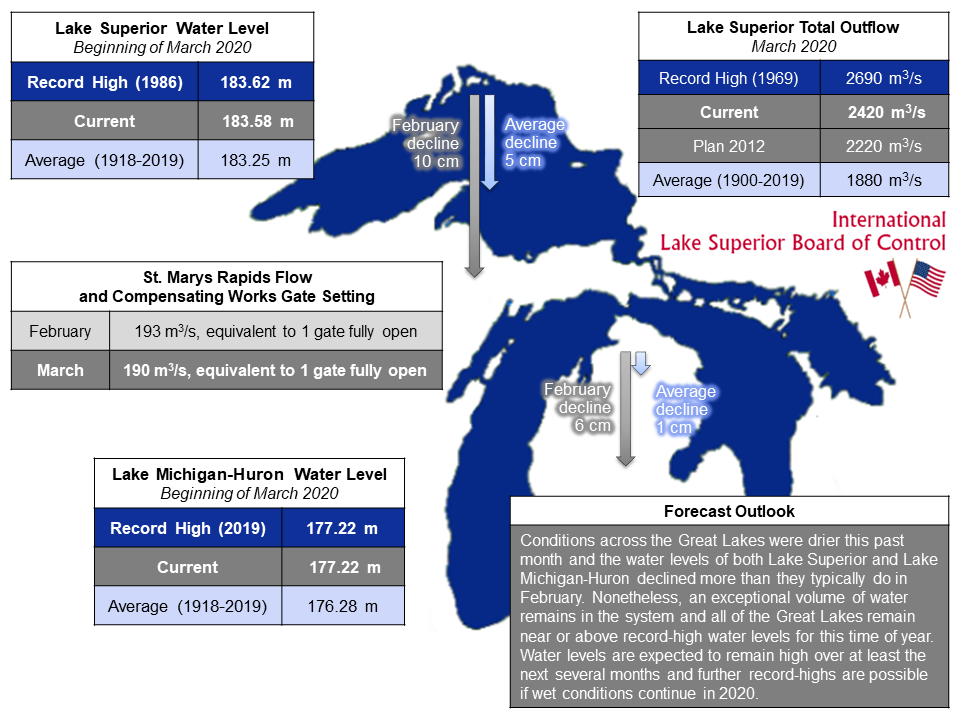 Lake Superior declined 10 cm over the course of the month, while on average the water level declines 5 cm in February. At the beginning of March, Lake Superior is just 4 cm below the record-high beginning-of-month level set in 1986. The level is currently 33 cm above average (1918 – 2019) and at the same level recorded at this time last year.

By letter dated 13 December 2019, the Board received approval from the International Joint Commission to continue to deviate from Lake Superior Regulation Plan 2012 through this winter. A small amount of additional flow will be released through the St. Marys Rapids this winter to offset expected and potential unscheduled reductions in flows at the hydropower plants that often occur in challenging winter conditions. This will be achieved by maintaining a gate setting equivalent to one gate fully open over the winter months instead of the typical winter setting equivalent to one-half gate open.  Gates are typically maintained at a constant setting in winter to avoid issues with ice, including the potential for ice jams in the St. Marys River.  Additionally, the higher rapids flows from December through April provide an increase in wetted habitat for fish that have already spawned in the rapids or that may over-winter in this area. It is anticipated that this deviation will have a minimal impact on Lake Superior and Lake Michigan-Huron water levels.

So far, the small amount of additional flow through the St. Marys Rapids has offset the reductions in flows at the hydropower plants that have occurred this winter, and actual Lake Superior outflows have been very close to those prescribed by Lake Superior Regulation Plan 2012. At this time, the Board expects the total outflow to be 2,420 m3/s in March, which is 200 m3/s more than that prescribed by Lake Superior Regulation Plan 2012. The effects of this deviation would be less than 1 cm on either Lake Superior or Lake Michigan-Huron. Nonetheless, if further hydropower reductions in March do not offset the additional flow expected, then slightly lower prescribed outflow will be released this spring to offset any additional water released.  Gates #5 through #12 will be maintained at a setting of 26 cm open (equivalent to one gate fully open) through the winter months. There will be no change to the setting of Gate #1, which supplies a flow of about 15 m3/s to the channel north of the Fishery Remedial Dike.