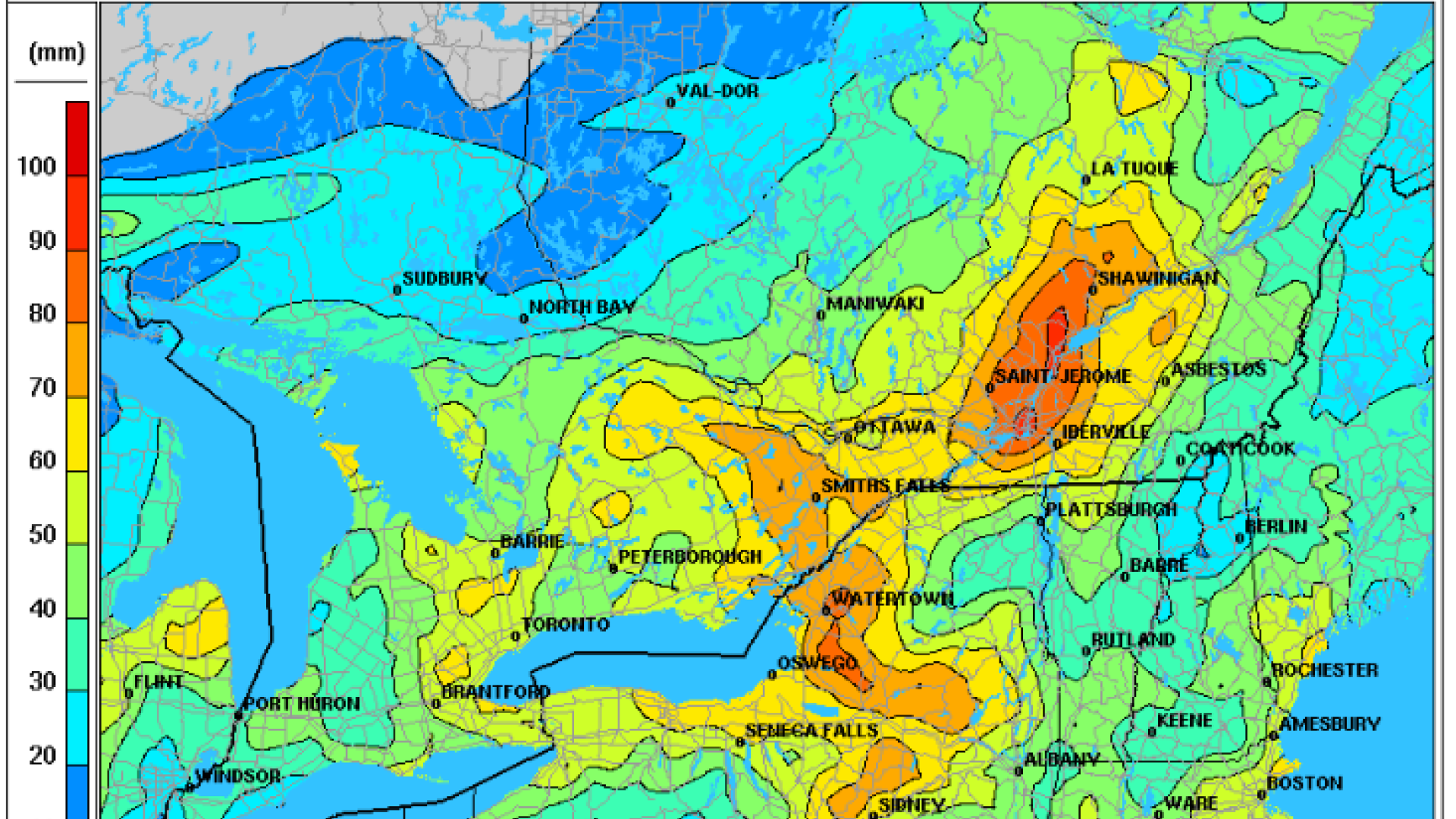 A series of storm events passed through the Lake Ontario-St. Lawrence River system from April 4-10, resulting in significant precipitation across the region. Some eastern parts of the Lake Ontario basin received as much as 80 millimeters (3.2 inches), while areas around the St. Lawrence River near Montreal saw as much as 90 mm (3.5 inches) during the same series of events.

With the ground already fully saturated, the recent rain, coupled with snowmelt in some areas, resulted in high amounts of runoff and rapidly increasing streamflows across the basin. Flood warnings were issued by many agencies in Canada and the US, and many reports of localized flooding have since been received.

The wet conditions have resulted in rapidly rising water levels throughout the Lake Ontario and St. Lawrence River system. Lake Ontario’s level has risen approximately 19 centimeters (7.5 inches) since April 4, increasing the risk of storm damages and leading to concerns among many lake riparians.

Downstream of Lake Ontario on the St. Lawrence River, levels at Lake St. Louis near Montreal, Quebec, have risen almost twice that amount during the same period, by about 37 centimeters (14.6 inches), due to rapidly rising Ottawa River and other local tributary flows. To prevent Lake St. Louis levels from rising further and causing more extensive damage, the International Lake Ontario-St. Lawrence River Board reduced outflows from Lake Ontario in accordance with Plan 2014, in effect since January.

However, it’s important to note that while Plan 2014 tries to balance these impacts, it cannot and does not eliminate the risk that high levels may occur during periods of extreme weather like we’ve experienced recently. In fact, no regulation plan can do so.

To illustrate the limitations of regulation, consider that it would have taken an increase in outflow of more than 6,000 cubic meters per second (211,900 cubic feet per second) above the average flow since April 4 of 7,010 cubic meters per second (247,600 cubic feet per second) to have maintained Lake Ontario at a stable level. A flow increase of that magnitude would be nearly impossible to achieve, physically. It also would cause levels at Lake St. Louis to rise more than 1 m (3 feet), resulting in catastrophic flooding throughout the lower St. Lawrence River.

Extremely high water levels are a concern to all riparians throughout the Lake Ontario-St. Lawrence River system. While impossible to avoid entirely, balancing the risk of high levels and associate impacts, both upstream and downstream, is a key aspect of Plan 2014.