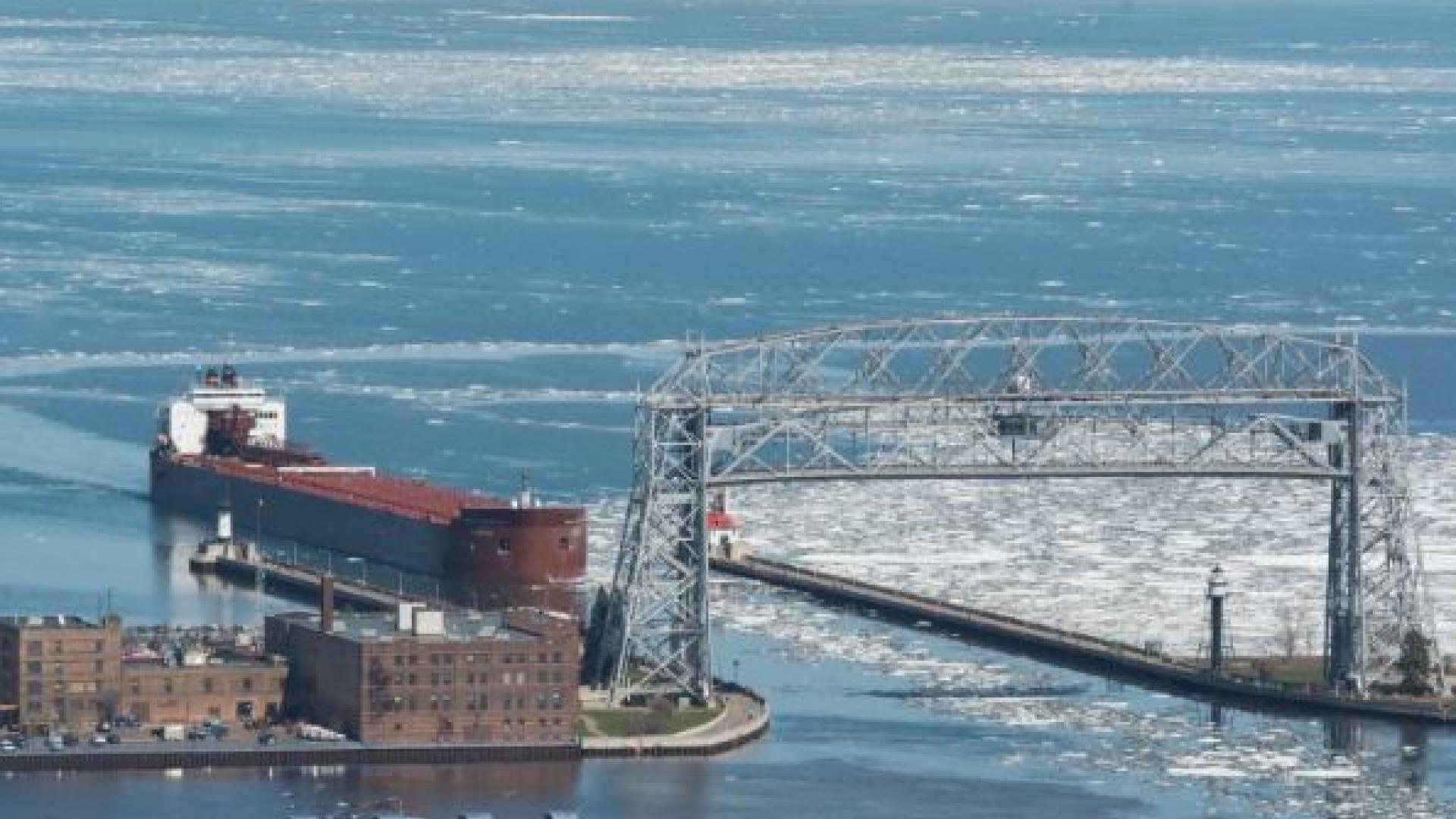 The Great Lakes are already home to more than 180 species of nonnative or unknown origin introduced through a variety of pathways, including unmanaged ballast water discharges from ocean-going vessels. Yet not all these invaders have spread across the system as rapidly as quagga mussels or Phragmites have on their own. They can get an assist, however, from ships traveling within the Great Lakes.

These “lakers” move from port-to-port within the lakes, moving cargo and in the process, taking up and discharging ballast water within the region. This has the potential to spread invasive species to other ports and other vessels, including “salties,” that may be heading out to the Atlantic Ocean via the St. Lawrence Seaway. Enforcement of ballast water management regulations implemented in Canada and the United States for oceangoing ships have led to zero new detected invasive species since 2006 from ballast water, according to Transport Canada (TC). One new non-indigenous species (Thermocyclops crassus) was discovered in western Lake Erie samples taken in 2014, though its method and timing of introduction is unknown. These regulations require oceangoing vessels to exchange their ballast water more than 200 miles from shore in a bid to kill freshwater hitchhikers, but what about those species that are already here?

The Department of Fisheries and Oceans Canada (DFO) researched lakers as a vector for invasive species from 2005-2007, and found examples where the ships were transferring species from one area to another, according to Dr. Sarah Bailey, research scientist with DFO’s Great Lakes Laboratory for Fisheries and Aquatic Species. In another study done by DFO between 2007-2009, scientists found that spiny waterflea, a nonnative species in Hamilton Harbour that’s been in the lakes since at least 1982, was present in ballast water headed for Lake Superior, where it previously hadn’t been detected, Bailey said. The same was true of native species that are only found in specific regions, such as Lake Ontario – the study found them in other Great Lakes harbors.

Under a national risk assessment comparing shipping activities across Canada, Bailey said, lakers were found to have one of the highest relative risks for spreading invasive species since they aren’t managed the same as marine vessels. For ships staying within Canadian waters in the lakes, there aren’t any ballast water regulations, meaning any nonnative species that enters Canadian waters in the St. Lawrence River could be inadvertently brought to the Great Lakes.

For those crossing between the US and Canada, they fall under the impending International Maritime Organization’s (IMO) Ballast Water Management Convention that enters into force on Sept. 8 (Canada is a signatory, and though the United States is not its discharge rules use the IMO’s as a base). These have two methods of dealing with ballast water: the marine-freshwater exchanges that the US and Canadian governments have already put into place, or using water treatment technology to reduce the number of “viable organisms” in the ballast water. The rules suggest that ships within a single country’s waters aren’t required to meet these ballast treatment measures unless their activities are proven to pose harm to the ecosystem and human health.

“DFO is of the opinion that all ballast water can pose harm and should be considered under regulation, but that is a decision still in process,” Bailey said.

Canadian regulation will need to be amended to align with convention rules coming into effect, according to TC spokeswoman Marie-Anyk Cote, and discussions are ongoing with Canadian and American entities with a stake in the shipping business – including operators of lakers. Once proposed amendments have been decided on, they’ll be published for public comment. In the meantime, the current Canadian regulations will continue to stand.

Guidelines in the United States are less unified. The US Coast Guard and Environmental Protection Agency have each issued their own ballast water requirements under different legislative authorities, though they are largely identical. The Coast Guard requires ocean-going vessels to install water treatment technology following their first dry-dock from January 2016 and beyond, or otherwise conduct ballast water exchanges in the ocean; the EPA’s regulation follows those same standards.  The US rules exempt domestic Great Lakes vessels from water treatment, but require high-risk vessels entering the lakes to conduct additional management measures. States can issue their own permits under EPA requirements. Six of the eight Great Lakes states have guidelines that are harmonized with EPA’s. Pennsylvania has no state-level guidelines and Michigan’s are more stringent, requiring the use of one of four specific water treatment technologies for ocean-going vessels.

Despite the lack of regulation for lakers, the Canada-based Chamber of Marine Commerce and US-based Lake Carriers Association say they voluntarily follow a range of “best management practices” to limit the possibility of invasive species being spread within the Great Lakes by lakers. These include regularly inspecting ballast tanks and removing accumulated sediments, avoiding ballast uptake in areas where invasive species are present, minimizing ballast operations in shallow water and continuing to cooperate with research studies and testing new ballast treatment systems. These practices are consistent with EPA’s Vessel General Permit guidelines, according to an EPA spokesperson.

Bruce Burrows, president of the Chamber of Marine Commerce, said that while seawater regulations have prevented new invasive species from being detected in the Great Lakes since 2006 – and lakers pose little risk of introducing new species – shipowners are looking to additional ways to manage ballast water discharges to address those concerns that they could transfer species already here. Burrows said they’ve been working with Canada’s National Research Council to create a tool that would evaluate ballast treatment systems for suitability to lakers – which discharge water faster than marine ships and can be damaged by chlorine – trialing technologies under development, and conducting water quality studies at ports and harbors. A 2015 Transport Canada report identifies other specific challenges to ballast treatment in lakers, including their size, the different qualities of freshwater versus saltwater, and their shorter trip lengths.

“The (Chamber) also believes that more research is needed to better define and understand the risk of transfer,” Burrows said.

Lake Carriers Assocation President Jim Weakley wrote in a 2015 editorial that lakers are structurally different from ocean-going transport ships. They are capable of discharging ballast water more quickly and are designed around freshwater environments; whereas oceangoing water treatment equipment may be based around chlorine treatment and have slower ballast exchange rates. Therefore systems that are not suited for the unique operational needs of lakers could shorten the life of vessels.

A bill in the US Senate would end state standards in favor of a single federal standard, and place sole responsibility for regulating ballast discharges with the US Coast Guard rather than sharing responsibility with EPA. The bill would require a review by 2022 that the measures being used are limiting ballast-related introductions of invasives, and every 10 years after that. That bill has not come before the full Senate as of July 25, nor has a similar bill in the US House of Representatives. The Lake Carriers Association and the Chamber of Marine Commerce both support that bill, and Burrows noted that it is “extremely difficult” to comply with the patchwork of US regulations.

The Lake Carriers Association declined comment pending action on that legislation, but issued a statement supporting the bill in a 2016 Congressional session, arguing that current Coast Guard and EPA regulations already exempt lakers from ballast water treatment. The association instead advocates its voluntary best management practices, alongside the Chamber of Marine Commerce, as the preferred way forward, alongside federal standards for establishing water management technology, inspections and enforcement standards.

While the IJC doesn’t have a specific reference from governments on ballast water, in 2004 it made recommendations that the Parties implement the IMO ballast water convention. The IJC has continued to support efforts to make sure that regulators, industry, nongovernmental organizations and environmental groups are all part of the conversation.