Preparing for a literal rainy day can save millions of dollars in the era of climate change. With the amount of greenhouse gases already in the atmosphere, the climate around the globe will be changing over the coming decades. Some communities, including those around the Great Lakes, are already trying to get ahead of climate change to prepare their infrastructure and residents for what’s coming. Toronto is one city that has been working to adapt to climate change for nearly a decade. Mark Bekkering, manager of implementation and support of the city’s Environment & Energy Division, said a 2007 Climate Change Action Plan included recommendations to reduce the city’s carbon emissions by 80 percent of 1990 levels by 2050. The plan also sparked discussion and research on how the city could prepare for major and minor climatic changes. “Since none of the research done to that date could help us identify (how) extreme weather events would change for Toronto, given the local impact of the Great Lakes and our geography and topography, we decided to commission our own climate modelling to see how extreme weather would change for the next 30-plus years,” Bekkering said. That report, adopted by the City Council in February 2013, predicts that in the extreme range, Toronto will face more frequent extreme rain events that cause flooding by 2050, and more extreme heat events in the summer months. By a coincidence, in 2013 Toronto faced two extreme weather events in line with what the report forecasted: a severe rain event in July that flooded tens of thousands of homes and knocked out power to the west side of the city, and an ice storm around Christmas that knocked out power across town for up to a week in some areas. Bekkering said those incidents “gave the motivation” to accelerate the city’s adaptation work. 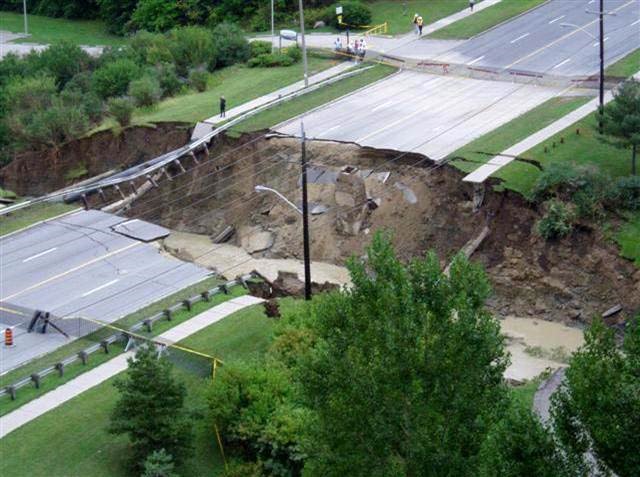 Finch Avenue West in Toronto was washed out following an intense rain storm in August 2005, impacting a variety of surface structures. Credit: Jane-Finch.com A consulting firm was commissioned to help the city create a “climate change risk assessment process and tool” to help identify future issues for a property, department, organization or area of the city. From there, Bekkering said, those groups can take steps to mitigate high-risk parts of Toronto. For example, the Transportation Services Department learned that control boxes for traffic signals can malfunction in extreme heat events, so workers installed cooling fans that turn on once temperatures reach a certain point. The city also is looking at backup power generation at key intersections in case of an outage. Toronto is enhancing its culvert management system by standardizing inspection and maintenance to help reduce the risk of blockage and collapse. Bekkering said the city is bringing broader private and public sector service providers – like telecommunication companies, the Enbridge oil pipeline company,  and provincial agencies – into the discussion to see where they can identify risks and work together on understanding common priorities, such as urban flood risks. These groups also are identifying interdependencies that could be affected by extreme weather. For example, subways rely on electrical power, so spending millions to make the subways resilient to flooding and heat won’t mean nearly as much if electrical utilities don’t take action to reduce their vulnerability to flooding and heat. On the opposite end of the Great Lakes is Milwaukee, where officials believe the greatest threat from climate change is an increased risk of severe storms causing major flooding. Milwaukee suffered “100-year storms” in 2008 and 2010 that caused stormwater and sanitary sewer system back-ups and subsequent backflows into people’s homes. Erick Shambarger, environmental sustainability director for Milwaukee’s Environmental Collaboration Office, said the city put together a “flooding study task force” following the 2010 storm – recognizing that severe storms are on course to become more frequent in the future. Milwaukee’s sewer infrastructure isn’t built to withstand storms of that magnitude, he said. The city is tackling the problem in multiple ways. Milwaukee has implemented a “Green Streets Stormwater Management Plan,” Shambarger said. That means any time a street is reconstructed due to pothole or pavement issues, it is inspected to see what sort of infrastructure would work there to contend with major rain events. These can include rain gardens, bioswales, or the use of porous pavement that allows more stormwater to go into soil rather than the drainage system. This benefits the groundwater cycle, reduces the amount pouring into stormwater lines and decreases flood risks. 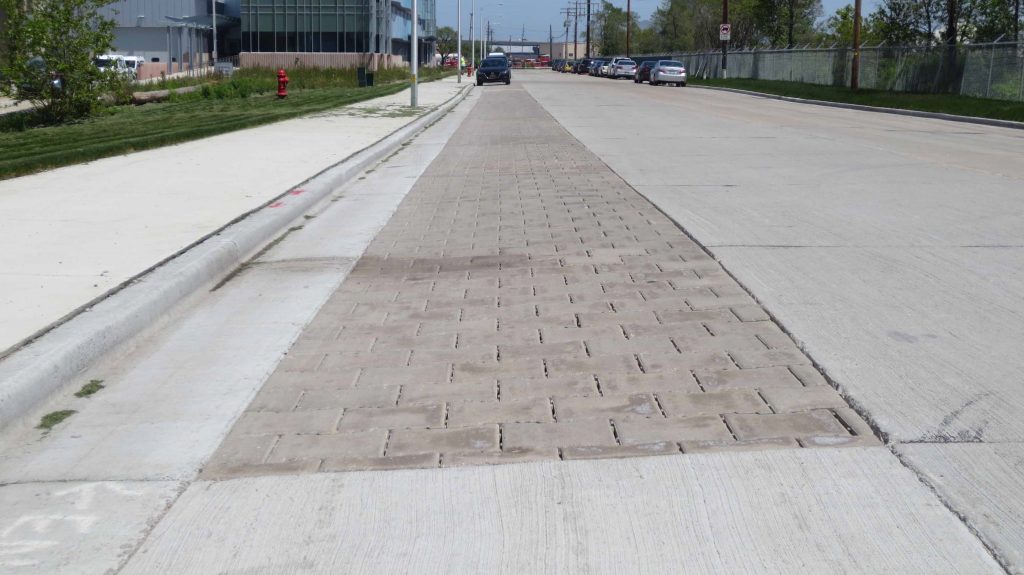 Permeable pavement on Milwaukee’s Greenfield Avenue allows precipitation to pass through into the ground rather than enter the storm sewer system, which in turn helps prevent backups and flooding. Credit: City of Milwaukee While stormwater and sewage flow into separate pipes in some parts of Milwaukee, the pipes are combined in older parts of the city. As a result, sewage can back up into area homes during severe storms, when the wastewater treatment plant is overwhelmed by combined stormwater and sewage. Shambarger said another problem stems from pipes connecting people’s homes to the public line: if those lines aren’t properly maintained, they can become leaky and discharge sewage and stormwater into groundwater. Milwaukee has pilot programs to help homeowners replace those private lines, but Shambarger said the money isn’t there to get a handle on the entire problem. The Milwaukee Metropolitan Sewerage District has its own project to help deal with flood risks with the County Grounds Basin, a way of containing heavy amounts of rain in a specific area to avoid floods. The $90 million project can retain and store 315 million gallons of water during a severe storm, bringing excess water from the Underwood Creek into the basin by way of an underground tunnel. The basin drains out to the Menomonee River, taking up to four days if the basin is completely full. Elsewhere in the city, Shambarger said officials are considering converting unoccupied, abandoned and foreclosed properties into storm reservoirs, channeling that backflow floodwater to those properties’ basements to spare occupied homes. This can be the equivalent of 600 55-gallon rain barrels on one parcel, he said, with some properties holding up to 44,400 gallons. The basements would be covered with turf after the house is demolished so that it can better fit in within the neighborhoods. Shambarger added that Milwaukee officials also are interested in combating the “heat island effect,” where the pavement causes the area around it to get hotter than it would otherwise. This could include removing pavement, which in turn helps the stormwater runoff issue. 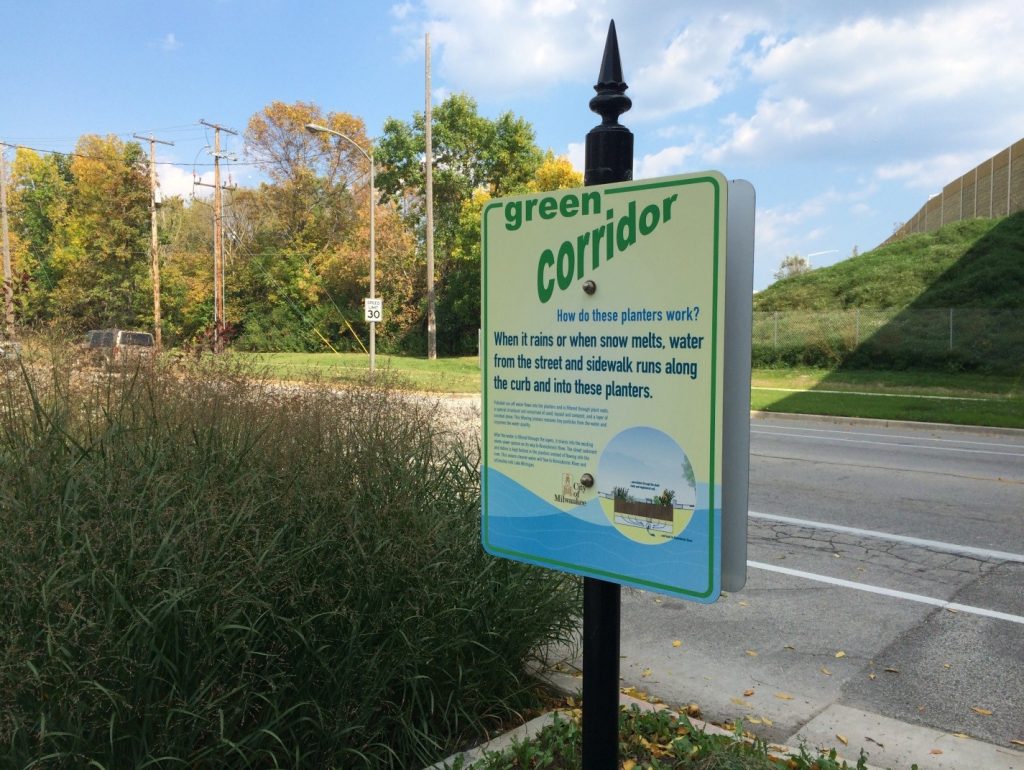 Planters and rain garden along the road in Milwaukee help keep water out of the sewer system as a way to adapt to extreme storm events. Credit: City of Milwaukee The cities of Toronto and Milwaukee both recognize that property owners will need to adapt to a changing climate. Bekkering said Toronto has set up an extreme weather page on its website to give advice to homeowners on how they can prepare and protect their homes from rain, ice, extreme heat and wind.  The city also is working with private property management companies and owners to evaluate how resilient their buildings are to severe weather events. Milwaukee has set up a Better Buildings Challenge to cut energy use in commercial buildings throughout the city, offering free assessments and loan financing to building owners that want to upgrade their properties. These can range from adding renewable energy sources to improving energy or water efficiency. Shambarger said the city also has residential programs to help homeowners purchase solar panels for their homes or to secure loans for energy efficiency upgrades, and is working to improve energy efficiency at manufacturing plants. “Everything we’re talking about is adapting to climate change, but that’s all in addition to work on energy efficiency and climate mitigation,” Shambarger said.