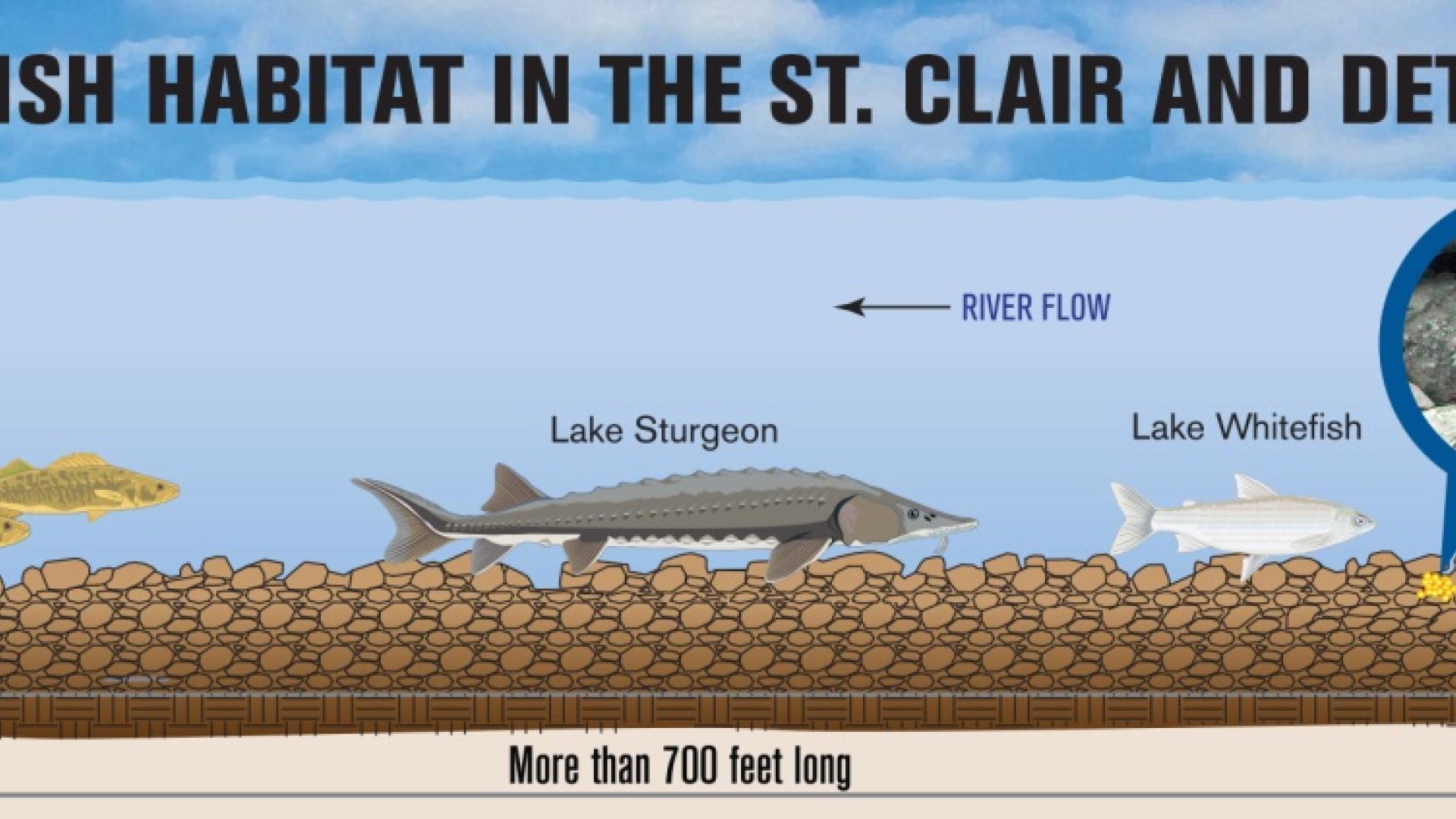 Lake sturgeon can trace their family history back to the dinosaurs, some 134 million years ago. In the last 140-plus years, though, they’ve been fighting for their lives.

Spawning sites are what they need --- a place to lay their eggs and reproduce. Sadly, most of those sites are blocked by dams in the Great Lakes region. Some of what remains, in the St. Clair and Detroit Rivers, has been altered since the 1870s to create shipping channels for commercial vessels.

Today, the sturgeon population in the Great Lakes is only 1 percent of what it once was. On the Detroit River, dredging along with overfishing and shoreline development have destroyed more than 60 miles of the natural limestone reefs that sturgeon traditionally used for spawning.

The St. Clair and Detroit, even in their altered states, continue to support one of the largest populations of sturgeon remaining in the Great Lakes.

Today, we know that these native fish are worth protecting. Lake sturgeon are considered a threatened species, with various listings at the state and provincial level in the Great Lakes basin.

They’re tough fish, as evidenced by their long history. They’ve been found depositing their eggs in unusual materials like coal cinders dumped by unloading ships near Algonac, Michigan.

Michigan Sea Grant and a number of partners think the fish deserve better, and have spent the last 10 years building four reef projects in the St. Clair and Detroit Rivers. These reefs mimic the natural limestone reefs that used to allow sturgeon to thrive.

The four projects have been successful, and lessons have been learned: A certain size and shape of rock is important, for instance, to maximize the space between the rocks and make sure the eggs are protected from predators, and not washed away by the water. 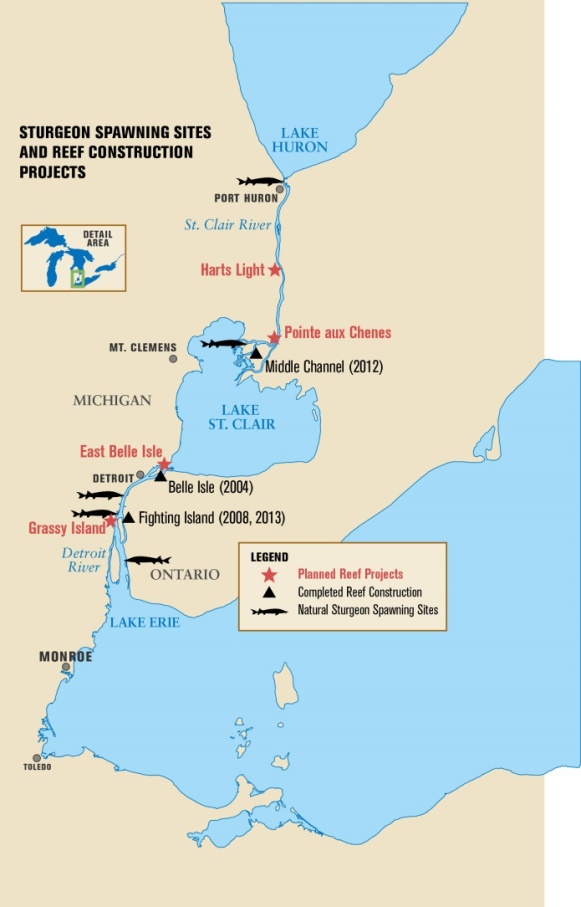 “These fish seek out rocky areas in clean, fast-flowing water,” according to project leader Jennifer Read. “Unfortunately, most of that habitat type was removed when the shipping channels were created or has filled with silt from agriculture and construction in the watershed. But we’re gradually restoring it with these reefs.”

This year, Sea Grant and its partners plan to build three optimized spawning reefs in Michigan near Algonac, East China and Detroit. They’ll use various techniques to see if sturgeon are depositing eggs on the reef, and if the eggs produce healthy young. They’ll also monitor populations of adult and juvenile fish on and near the reefs. The reefs also can support walleye, lake whitefish and other native species.

The results will come slowly. Lake sturgeon are unique in the Great Lakes. They can grow up to 7 feet, weighing as much as 300 pounds. Females take up to 25 years before they’re ready to reproduce. Males take about 15 years.

Once they’re ready, the females spawn only every four years, on average. The males usually spawn every other year.

You can read more about the lake sturgeon reef project as part of reports prepared by the U.S. Geological Survey: here and here.

By the end of this year, the project team plans to have created almost 10 acres of spawning habitat in U.S. and Canadian waters of the St. Clair and Detroit rivers. This year’s projects are funded by the National Fish and Wildlife Foundation, U.S. Environmental Protection Agency and the U.S. Fish and Wildlife Service through the Great Lakes Restoration Initiative, with additional matching support from partner organizations.

In Canada, the government supports projects to clean up 14 remaining Areas of Concern or “degraded areas” within the Great Lakes basin through the Great Lakes Sustainability Fund (GLSF).

Since 1989, the GLSF has contributed about $110 million to more than 900 partnered projects to improve water quality.

In 2013-2014, the GLSF provided almost $1.9 million for 31 projects. That included a $100,000 Lake Sturgeon Spawning Reef Expansion Project. The goal of the project was to address the loss of fish and wildlife habitat and populations, and provide fish spawning habitat for lake sturgeon and other fish species within the Detroit River. An existing reef was doubled in size to 0.8 hectares.