After four years of service, the Hon. Joseph Comuzzi’s term as Canadian Chair of the International Joint Commission ended on Jan. 14, 2014. His tenure at the Commission capped a quarter century of service to the people of Canada. As chair, Comuzzi showed his passion regarding issues important to people along the Canada-U.S. boundary, especially First Nations and Metis.

Commissioners and staff wish Joe and his family all the best for the future.

On Jan. 15, 2014, the government of Canada appointed Commissioner Gordon Walker as Acting Chair of the IJC’s Canadian Section. 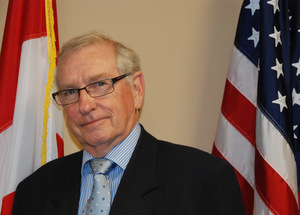 He has been a practicing lawyer, a financial services business owner, and a former politician having served as City Councillor for five years, an MPP for 12 years and a Cabinet Minister in Ontario for seven years.

He and his wife Harriet make their home in Toronto.

Tags
International Watersheds Initiative
Rainy-Lake of the Woods Watershed Board