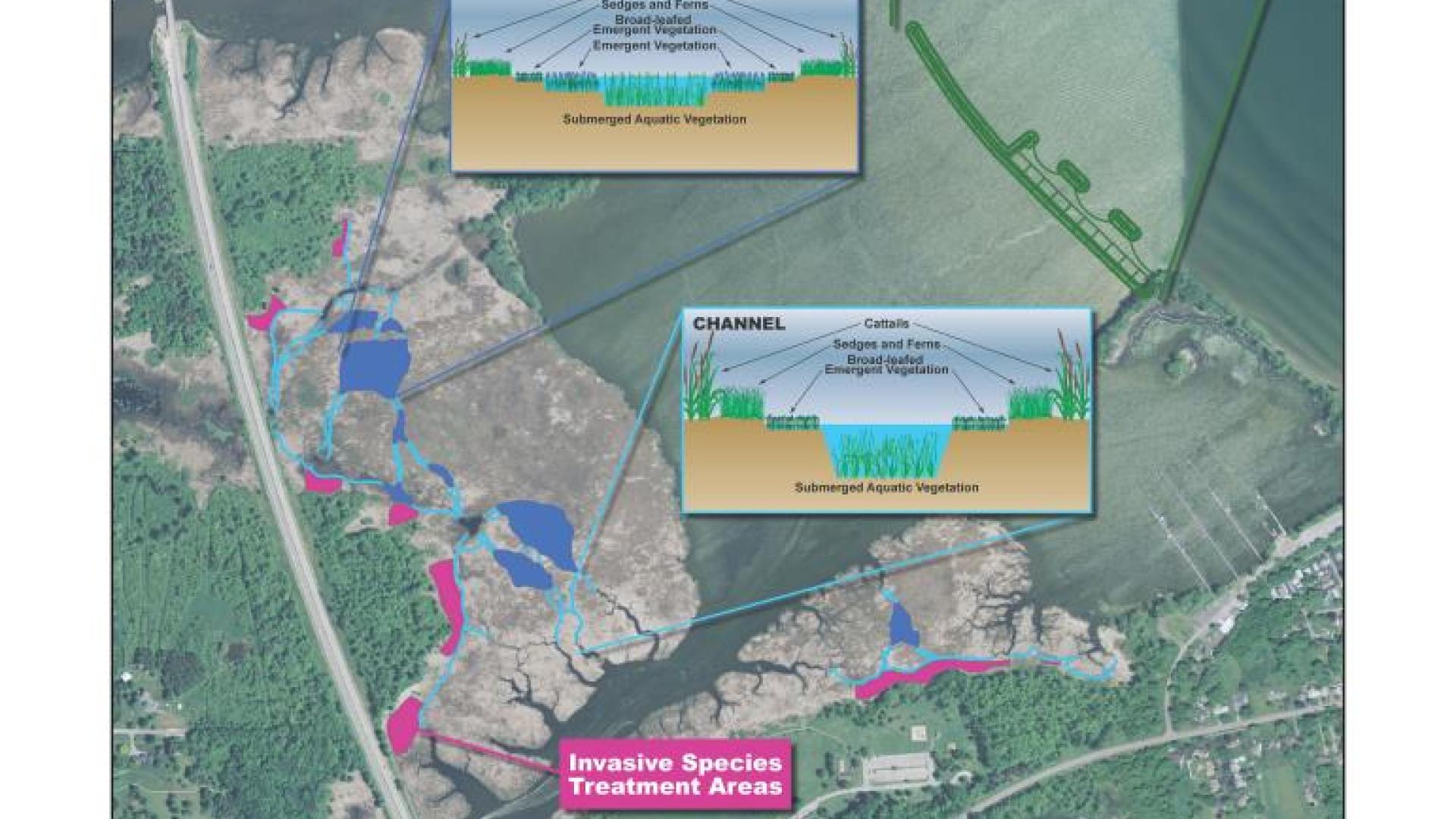 Braddock Bay, located along the shores of Lake Ontario in the town of Greece, N.Y., has gradually lost its protective barrier beach and about 106 acres of wetlands over the last 100 years due to wave-driven erosion. Further, Lake Ontario water level regulations enacted in 1954 have decreased fluctuations in the water level, resulting in the predominance of cattail in an area that was once a diverse habitat at the site.

With the goal of restoring and improving habitat diversity of the existing emergent marsh and reducing erosion, the U.S. Army Corps of Engineers (USACE), Buffalo District, in coordination with U.S. Environmental Protection Agency, New York State Department of Environmental Conservation (NYS DEC), and the town of Greece have completed a feasibility study identifying a plan for ecosystem restoration at Braddock Bay. 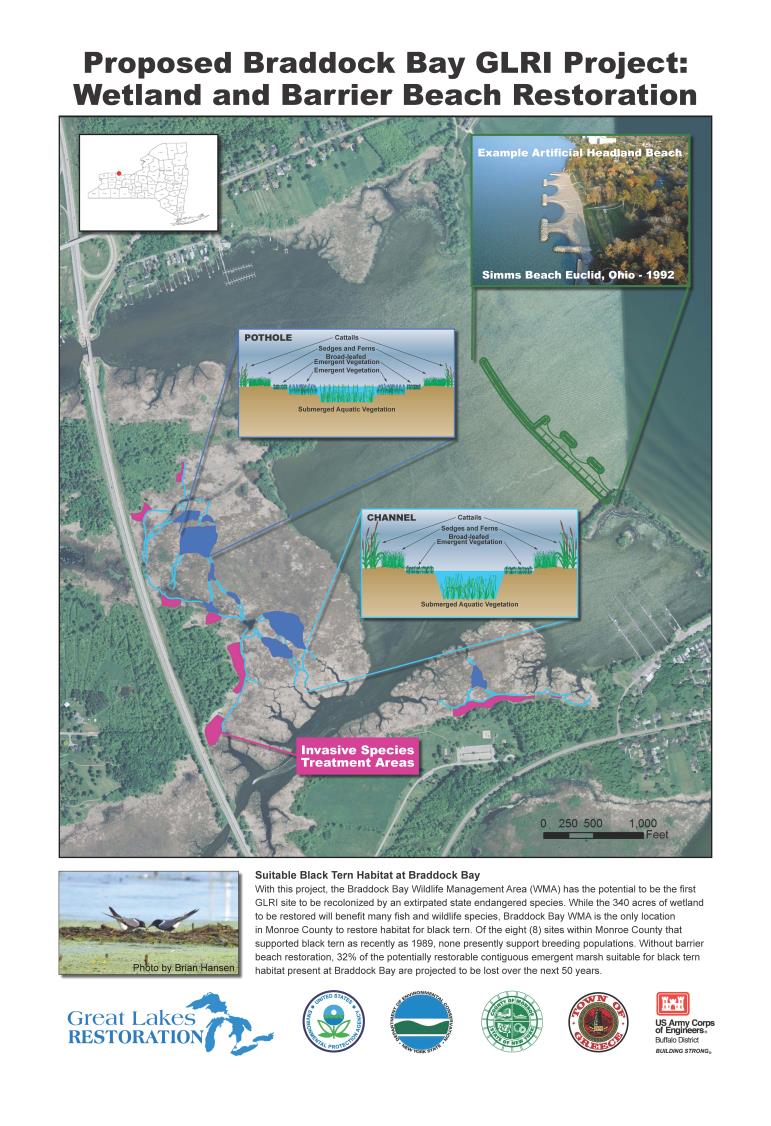 The habitat of the emergent marsh, currently dominated by cattail, will be restored through the excavation of about 10 acres of channels and potholes, in combination with chemical and mechanical invasive species management measures. These actions will increase vegetative diversity and improve habitat suitability of Braddock Bay for fish and wildlife including the state-endangered black tern, American mink, and northern pike.

“The black tern was chosen as a target species for habitat restoration, because it represents historic habitat that is no longer present in the bay,” said Forgette. “Habitat to be restored during this project is characterized by diverse aquatic vegetation zones, sedge grass meadows, and open water areas interspersed within a matrix of emergent marsh.”

As part of the Braddock Bay project, barrier beach functionality will be restored to mimic the form and function of the historic land spits. Barrier beach protection has been documented at Braddock Bay as far back as the 1800s, but has been gradually lost due to erosion.

The artificial headland beach will protect parts of Braddock Bay from the direct wave energy of the open lake. This will reduce erosion of the existing wetlands and restore Braddock Bay to a low-energy system. Lower wave energy and reduced turbidity is expected to result in an increase and expansion in diversity of the existing submerged aquatic vegetation community.

"Braddock Bay is a very special natural area that is threatened by continued erosion from wave action, which has already resulted in the loss of a significant area of emergent wetland habitat," said James Tierney, assistant commissioner for the NYS DEC Office of Water Resources.

The restored barrier beach could create approximately three acres of shorebird habitat, and may also partially restore littoral drift functionality (the gradual transport of sediments in the littoral or shallow zone of Lake Ontario) by blocking a portion of littoral sediments from entering Braddock Bay and becoming trapped within it. 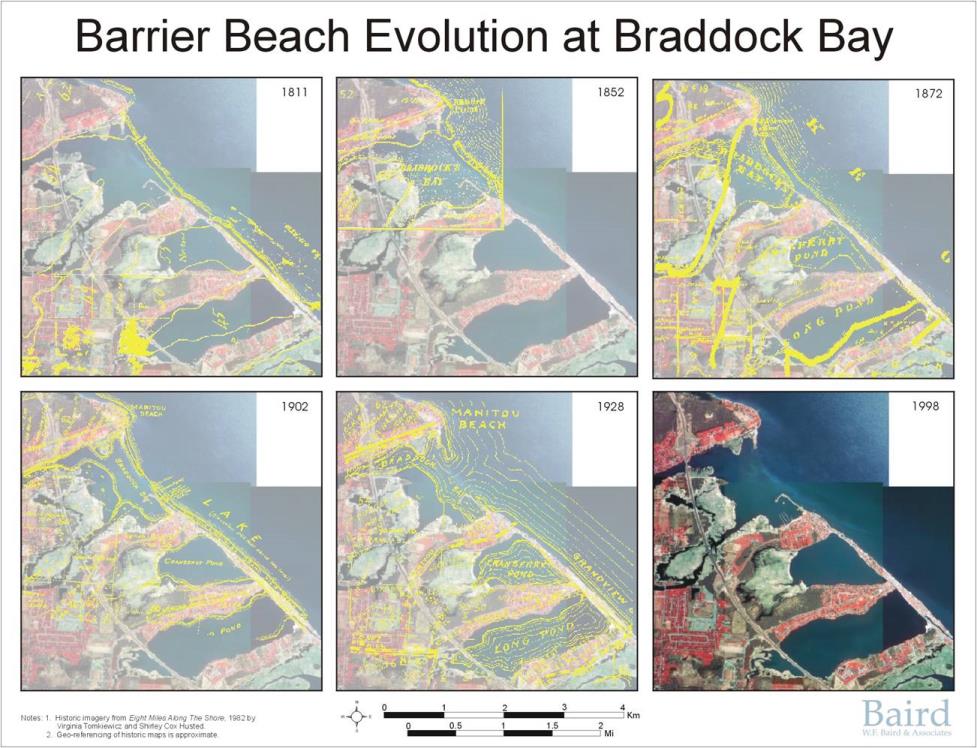 "The project currently being undertaken by the Army Corps of Engineers is the first step to revitalizing the Braddock Bay area,” said Bill Reilich, town of Greece supervisor. “We are excited that the project will restore and protect this valuable natural resource.”

It’s such an important resource that the project has gained the support of U.S. Sen. Chuck Schumer, D-N.Y., who has been supportive of the Braddock Bay project and the Great Lakes Restoration Initiative as a whole.

"Community input is critical on a project like this, and I will continue to work with the Army Corps to make sure local voices are heard and that we keep the momentum going," said Schumer.