The comment period closed on July 31, 2015. Thank you for your comments. Comments have been compiled and are available on this page. 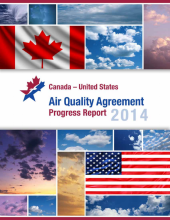 Under the Air Quality Agreement, the IJC invites public comment and provides a synthesis of comments to the governments of Canada and the United States, to assist them with implementing the Agreement. The IJC invites you to send written comments on this report until July 31, 2015, to either address below:

The Acid Rain Annex, negotiated with the original 1991 agreement, committed both the United States and Canada to reducing acid rain-causing emissions of sulfur dioxide (SO2) and nitrogen oxides (NOX). Since this time, there have been large reductions in SO2 and NOXemissions on both sides of the border with subsequent reductions in ecosystem acidification and improvements in air quality. For example, the United States has reduced total SO2 emissions from covered sources by 67 percent in 2010 from their 1990 levels while Canada’s total SO2 emissions have decreased by 57 percent in 2010 from 1990 emission levels.